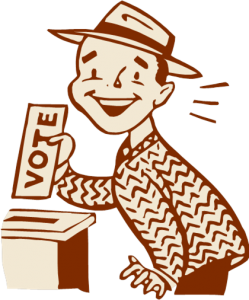 To follow up on yesterday’s post about the Obama-Holder DoJ’s efforts to prevent Florida from cleaning up its voter rolls, here’s an excerpt from an editorial at IBD by Andrew Malcolm, who makes no effort to hide his disgust:

Washington has ordered Florida to end its effort to remove ineligible voters from the state’s voter rolls. This is breathtaking. It couldn’t be clearer that the government is actively promoting voter fraud.

So why shouldn’t voters have to authenticate their identities at the polls and prove they are eligible? Why should voting be so informal and lacking in rules that it invites fraud? Only muddled thinking — or an outright lack of thinking — could fail to make the connection.

It’s sad, but Democrats have made it clear that honest elections are not something they’re interested in. From easy registration that rewards indolence — motor voter laws, for instance — to strident opposition to rules that require voters to show they are who they say they are, the political left clearly likes messy elections.

Why? Columnist George Will answered that more than 20 years ago when he wrote:

“If mild registration burdens are sufficient to defeat a person’s inclination to vote, those burdens probably are filtering out the unmotivated, who are apt to be the uninformed.”

In other words, the Democrats’ opposition to clean elections is their tacit admission that they expect the uninformed to fall for their rhetoric and vote for them.

They also clamor for votes from the felons they coddle, the illegal immigrants they solicit and the criminally minded, politically rabid voters who cast ballots for dead voters or vote multiple times on election day — think of Democratic strongholds like Chicago and Philadelphia, where such shenanigans are common.

Read it all. Andrew’s on fire… and he’s right.