Hah! Found out last night that Your Humble Correspondent, cross-posting at Sister Toldjah’s site on the administration’s invocation of executive privilege with regard to Operation Fast and Furious, was cited briefly on MSNBC’s “The Ed Show,” hosted by the ever-genteel Ed Schultz. Here’s the screen cap: 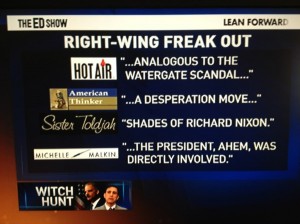 And this is the post to which they’re referring.

So, in the past I’ve been called “insensitive” and “ignorant,” but this is way cool. To be in the same company as those other rabid right-wingers above is… is… *sniff!* That’s the nicest thing a left-wing tool has ever said to me.

Thanks, Ed! You’re the best!

5 Responses to "If it’s a “Right-Wing Freak Out,” I’m in great company"