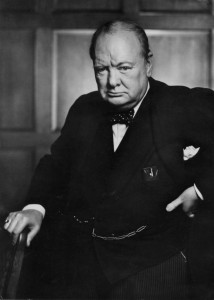 On questions of economic law is does not matter at all what the electors think or vote or say.  The economic laws proceed.  (1929)

“All men are created equal,” says the American Declaration of Independence.  “All man shall be kept equal,” say the British Socialist Party.

It is an error to believe that the world began when any particular party or statesman got into office.  It has all been going on quite a long time. . .

Nothing would be more dangerous than for people to feel cheated because they had been led to expect attractive schemes which turn out to be economically impossible.

The Left is going to learn the truth of that first one not too long from now.

3 Responses to "Quotes of the Day: Churchill on the election"