Oh, I know. I know. I’m RAAAAACIST!!! for even suggesting that. But numbers, while subject to interpretation, don’t lie. And in this case, they’re pretty hard to read any other way. From Zero Hedge:

Exactly two years ago, some of the more politically biased progressive media outlets (who are quite adept at creating and taking down their own strawmen arguments, if not quite as adept at using an abacus, let alone a calculator) took offense at our article “In Entitlement America, The Head Of A Household Of Four Making Minimum Wage Has More Disposable Income Than A Family Making $60,000 A Year.” In it we merely explained what has become the painful reality in America: for increasingly more it is now more lucrative – in the form of actual disposable income – to sit, do nothing, and collect various welfare entitlements, than to work. This is graphically, and very painfully confirmed, in the below chart from Gary Alexander, Secretary of Public Welfare, Commonwealth of Pennsylvania (a state best known for its broke capital Harrisburg). As quantitied, and explained by Alexander, “the single mom is better off earnings gross income of $29,000 with $57,327 in net income & benefits than to earn gross income of $69,000 with net income and benefits of $57,045.“

And here’s the chart that illustrates the point: 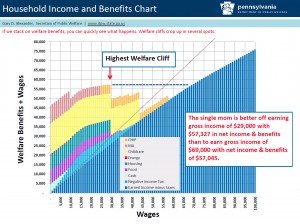 Talk about perverse incentives. As structured now, a rational individual would look at this and conclude that he’s better off collecting rents from the rest of us, than working to better himself.

Be sure to read the rest. There’s much more — and it’s scary.

Not that we’ll have to worry for long, though, since the economy will simply shut down in 2027.

3 Responses to "In Obama’s America, you’re better off on welfare"