My blog-buddy ST featured this in her Hot Headlines section yesterday, but I thought it deserved front-page treatment. This video, narrated by wealthy Leftist actor Ed Asner, teaches nothing but class warfare and shows the rich urinating on the poor: 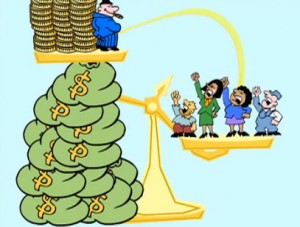 (Note: Since it first came to public notice yesterday, the video has been made private. I guess the California Teachers Union didn’t want us to know what they really think of those who disagree with them.)

EAG News, which first reported the video, describes it this way:

A new video produced by the California Federation of Teachers – which could be playing in your child’s classroom as we speak – drums up the typical class warfare images we’ve come to expect from Big Labor.

“Tax the Rich: An Animated Fairy Tale,” written by CFT staffer Fred Glass (2011 compensation: $139,800) and narrated by proud leftist actor (and 1 percenter) Ed Asner, advocates for higher taxes on the “rich” as the cure for government’s insatiable thirst for spending.

The video claims the rich got rich through tax cuts and tax loopholes and even tax evasion.

But when the 99 percent fought back, the “rich” apparently urinated on the “poor,” at least according to the video. What a classy way to frame your argument for children, Big Labor.

EAG News chronicles the factual errors in the video, but PJM’s Bryan Preston cuts to the heart of the matter:

The video never deals with the fact that the top one percent of wage earners in the United States pay about 33% of all the income taxes, and the top five percent pay more than half of all the taxes. The poor reasoning and dishonesty in the video are made worse by the fact that it was created, evidently, by teachers. By the people who are educating your children and mine.

And California voters, via Prop 32, just voted to give these yahoos more money, in the form of dues take from teachers’ salaries, which are paid for by our taxes. Too bad this didn’t come out before the election.

Meanwhile, this shows how hard the battle to reform the culture will be, when our teacher training programs are turning out “educators” who could have worked as propagandists for the Comintern.

6 Responses to "And these are the people who are teaching our children, shaping our future."