They made and broke the same promises: 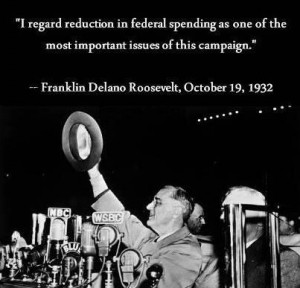 Compare that to this statement by the Man Who Would Be FDR:

“This is big,” wrote White House director of new media Macon Phillips in a February 23, 2009 blog post, ”the President today promised that by the end of his first term, he will cut in half the massive federal deficit we’ve inherited. And we’ll do it in a new way: honestly and candidly.”

Indeed, President Obama did make that promise that day, saying, “today I’m pledging to cut the deficit we inherited in half by the end of my first term in office. This will not be easy. It will require us to make difficult decisions and face challenges we’ve long neglected. But I refuse to leave our children with a debt that they cannot repay — and that means taking responsibility right now, in this administration, for getting our spending under control.”

The 2013 budget the president submitted today does not come close to meeting this promise of being reduced to $650 billion for fiscal year 2013.

Few remember today that Roosevelt ran to the right of Hoover on spending, decrying government that “costs too much.” Obama, in his turn, promised to go through the budget “line by line” to make D.C. more frugal.

In other words, both took over from presidents who had already expanded government and increased spending, both promised to get the budget under control, and both broke those promises to instead grow government and government spending massively.

Time was right: Obama really is the second FDR. 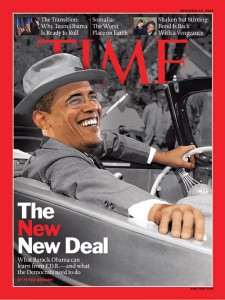 4 Responses to "Quote of the Day: Obama really is the second FDR edition"