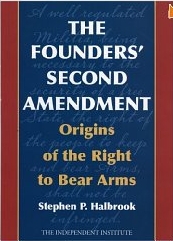 The right to carry a weapon and the efforts to restrict that right, the latter euphemistically called “gun control,” have been much in the news lately. In the wake of horrific mass-killings at an elementary school and a movie theater, the liberal left in America (and other people genuinely appalled at what happened) have called for new restrictions on the kinds of firearms people are allowed to have. Strenuous efforts were made in the federal Senate to reinstate a ban on so-called “assault weapons,” while the states of Colorado and New York have recently passed highly restrictive new firearms laws.

Central to this debate (more of a screaming argument, really) has been the Second Amendment to the Constitution of the United States, which reads:

A well regulated Militia, being necessary to the security of a free State, the right of the people to keep and bear Arms, shall not be infringed.

Since the Constitution and the Bill of Rights are documents meant to limit the power of government, a central question has been “What does the amendment mean, and what does it allow the government to do?”

One would think the question would be an easy one, the phrase “shall not be infringed” being quite clear, but things are no longer so simple. Advocates of strict gun control have variously argued that the Second Amendment refers to a group right, not one held by individuals; that it refers to the right to bear arms solely while serving in a militia, not to have them in one’s home; that the right is limited only to hunting and other sporting uses, thus allowing the government to regulate firearms “not necessary” to that; that the frontier no longer exists, so there’s no need for militia-style defense; and that the progress of technology has made weapons too dangerous for individual use, thus rendering the amendment obsolete and non-operative.

Defenders of the right to bear arms, on the other hand, not only point to the plain text of the amendment, but argue that one must look to the experiences of the founding generation at the time of the amendment’s writing and how they understood the precise words they used in it and other areas of our core documents. In other words, one must consider their original intent.

Stephen A. Halbrook’s “The Founders’ Second Amendment: Origins of the Right to Bear Arms” (hereafter “TFSA”) provides an invaluable contribution to the “originalist” argument in defense of the right to keep and bear arms. Halbrook explains his intention thus:

This work seeks to present the views of the Founders who actually created the Second Amendment. It is based on their own words as found in newspapers, correspondence, debates, and resolutions. Generous quotations from the Founders are used to allow them to speak for themselves, thereby avoiding the appearance of re-characterization of their views.

The “Founders” were the generation of Americans in the eighteenth century who suffered in the final stages of British colonialism, fought the Revolution and won independence, debated and adopted the Constitution and Bill of Rights, and established the republic. The members of that generation passed away by the early nineteenth century, but their constitutional legacy is, if not immortal, a singular triumph in the history of human freedom. (Kindle edition, beginning at location 175)

Halbrook covers the roughly 60 years from 1768 (the British military occupation of Boston) to 1826 (when Adams and Jefferson died) and the Founders thinking on the right to keep and bear arms in great detail, from the colonists’ original assertion of their rights as Englishmen through the writing of the first post-independence state constitutions, the writing and ratification of the U.S. Constitution, and the debate over the Bill of Rights. He cites not only the opinions and arguments of the first-tier, well-remembered Founders (Adams, Jefferson, Madison, &c.), but also of nearly forgotten but influential men such as Tench Coxe and St. George Tucker. Quotations come from both those who supported the ratification of the Constitution (“Federalists”) and those who opposed it (“Anti-Federalists”), as well as those who would support it only with a Bill of Rights, with the right to bear arms being primary among their concerns. To make sure we understand the meanings of the amendment’s words as the Founders’ did, he frequently cites from Noah Webster’s “Compendious Dictionary of the English Language” (1806).

In no case, Halbrook avers, did anyone among the Founders acknowledge a government “right” to restrict, ban, or confiscate the arms of law-abiding citizens.

TFSA also spends a great deal of time on the question of a “militia” versus a “standing army,” which was a topic of overriding importance at the time, given the Americans’ experience of tyranny and violence at the hands of British regulars. Halbrook argues, to my mind convincingly, that the militia clause of the Second Amendment, “A well regulated Militia, being necessary to the security of a free State,…” is a statement of purpose, not proscription limiting the right to bear arms to militia service. It is an assertion that the People’s right to keep and bear arms cannot be denied because a militia, composed of the body of the People, is essential to enforce the laws, suppress rebellion, defend against invasion, and as a last resort against tyrannical government, that last being something the Founders had very personal experience of in their own lives.

Regarding style, Halbrook’s writing is straightforward and easy to follow. If the book sometimes seems tedious, it is because the author is making a strong effort to be thorough and to bring home the point that early American opinions on the right to bear arms were remarkably consistent. In this case, this thoroughness is a virtue, not a flaw. However, the Kindle version, on which this review is based, is plagued with frequent typographical errors that look to be the result of scanning from the original without a subsequent editing. While very annoying, this does not detract from the book’s immense value in the current debate.

“The Founders’ Second Amendment: Origins of the Right to Bear Arms,” by Stephen Halbrook, is available in both paperback and Kindle format. (Fair disclosure: Buying a copy nets me a few pennies.)