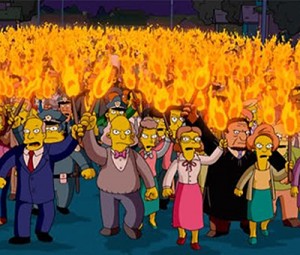 If this Politico story is true, it’s pitchforks and torches time:

Congressional leaders in both parties are engaged in high-level, confidential talks about exempting lawmakers and Capitol Hill aides from the insurance exchanges they are mandated to join as part of President Barack Obama’s health care overhaul, sources in both parties said.

The talks — which involve Senate Majority Leader Harry Reid (D-Nev.), House Speaker John Boehner (R-Ohio), the Obama administration and other top lawmakers — are extraordinarily sensitive, with both sides acutely aware of the potential for political fallout from giving carve-outs from the hugely controversial law to 535 lawmakers and thousands of their aides. Discussions have stretched out for months, sources said.

A source close to the talks says: “Everyone has to hold hands on this and jump, or nothing is going to get done.”

Yet if Capitol Hill leaders move forward with the plan, they risk being dubbed hypocrites by their political rivals and the American public. By removing themselves from a key Obamacare component, lawmakers and aides would be held to a different standard than the people who put them in office.

Boehner couldn’t be this stupid, could he? I mean, forget Harry Reid; I wouldn’t put anything past that weasel. But Speaker Boehner has to know any deal carving out an exemption for Congress would tear the Republican coalition apart, doesn’t he? The nation overall hates Obamacare, but, to the conservative base this law is a constitutional obscenity, a legislative vampire that needs a stake driven through its heart and an anonymous burial at a crossroads at midnight. To make a deal exempting themselves from its provisions would be see as nothing less than a gross, vile betrayal, and it would cripple the Republican efforts in the 2014 elections before the campaign really got underway.

While reading the article, the cynical side of me wondered if this wasn’t a hit job by the liberal Politico, which isn’t exactly known for unbiased reporting. Throughout the article, they’re at pains to emphasize how much of a danger a deal would pose to Democrats. But, think about it: the Left will vote Democratic no matter what, because they know Obamacare is a Trojan Horse hiding within it their beloved single-payer system. They’ll let Reid cut a deal now, knowing they’ll eventually get what they want. But Boehner? What would he gain from this? Well, when I read this:

There is concern in some quarters that the provision requiring lawmakers and staffers to join the exchanges, if it isn’t revised, could lead to a “brain drain” on Capitol Hill, as several sources close to the talks put it.

The problem stems from whether members and aides set to enter the exchanges would have their health insurance premiums subsidized by their employer — in this case, the federal government. If not, aides and lawmakers in both parties fear that staffers — especially low-paid junior aides — could be hit with thousands of dollars in new health care costs, prompting them to seek jobs elsewhere. Older, more senior staffers could also retire or jump to the private sector rather than face a big financial penalty.

When asked about the high-level bipartisan talks, Michael Steel, a Boehner spokesman, said: “The speaker’s objective is to spare the entire country from the ravages of the president’s health care law. He is approached daily by American citizens, including members of Congress and staff, who want to be freed from its mandates. If the speaker has the opportunity to save anyone from Obamacare, he will.“

Dear Speaker Boehner: You may feel real sympathy for aides who will take a severe hit from Obamacare, but so will the rest of us, and we won’t forgive self-dealing in this case. This is a terrible, terrible idea. Don’t just call it off, call a press conference for Thursday to denounce it in unmistakable terms. Harry Reid is playing you. State as clearly as you can that Congress and all who work in it will suffer under this bill the same as all Americans, until it is repealed.

Otherwise, you can kiss off your House majority.

UPDATE: Per Ezra Klein at The Washington Post, this may be much less than it seems:

If this sounds unbelievable, it’s because it is. There’s no effort to “exempt” Congress from Obamacare. No matter how this shakes out, Congress will have to follow the law, just like everyone else does.

Based on conversations I’ve had with a number of the staffs involved in these talks, the actual issue here is far less interesting, and far less explosive, than an exemption. Rather, a Republican amendment meant to embarrass Democrats and a too-clever-by-half Democratic response has possibly created a problem in which the federal government can’t make its normal contribution to the insurance premiums of congressional staffers.

Follow the link for the rest. Which is true? We’ll just have to wait and see. (h/t “ReallyNow” in the ST comments)

12 Responses to "Congress and their aides getting an Obamacare exception?? UPDATE: @Politico jumped the gun?"