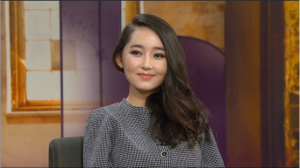 There’s an interesting and frightening interview posted to Business Insider today with Yeonmi Park, a woman who escaped from North Korea with her family as a teenager, but needed years to get over the brainwashing she endured there. An indoctrination so intense, she believed the late Kim Jong Il could read her mind:

Yeonmi Park grew up in North Korea, under the watchful eye of then-leader Kim Jong-il.

Though she escaped with her family when she was 15, it took her years to get over the intense brainwashing she experienced. In a recent interview with Australian public broadcasting channel SBS, Park went into unbelievable detail about growing up in the totalitarian state.

Growing up in North Korea, according to Park, was like “living in hell.” She describes constant power outages, no transportation, and watching classmates and friends disappear without a trace. While that may be unsurprising, the most interesting part of Park’s experience is her admission that she believed Kim Jong-il to be “a god” who could literally read her mind.

“I had to be careful of my thoughts because I believed Kim Jong-il could read my mind. Every couple of days someone would disappear,” Park said.

Ms. Park’s story is part of a larger program on mind-control shown by SBS, the Australian public broadcaster.  The whole show is worth watching.

In an article at SBS, she tells more of her own story:

I lived in North Korea for the first 15 years of my life, believing Kim Jong-il was a God. I never doubted it because I didn’t know anything else. I could not even imagine life outside of the regime.

It was like living in hell. There were constant power outages, so everything was dark. There was no transportation – everyone had to walk everywhere. It was very dirty and no one could eat anything.

It was not the right conditions for human life, but you couldn’t think about it, let alone complain about it. Even though you were suffering, you had to worship the regime every day.

I had to be careful of my thoughts because I believed Kim Jong-il could read my mind. Every couple of days someone would disappear. A classmate’s mother was punished in a public execution that I was made to attend. I had no choice – there were spies in the neighbourhood.

George Orwell’s 1984 depicts the UK after an atomic war and a Socialist revolution. Big Brother is a de facto god to the people: his every word the undeniable truth, no matter how it contradicted what he might have said just the day before. Your innermost thoughts known to him, and he held the power to make you willing to accept your own death and the deaths of those close to you as just. His Animal Farm is a parable of a just revolution hijacked by an anti-democratic cadre, who maintain power by turning the other animals against each other and all into slaves. Both are taught as works of fiction, but Yeonmi Park’s story reminds us that they were more like docu-dramas and that the story hasn’t come to an end.

It reminds me of a saying of John Adams:

Our second president was right, but left something out: it’s not just that Mankind is too morally weak for any one person to hold absolute power, but there is also the weakness that makes us willing to surrender our responsibilities as citizens and entrust a small group of people or a single person with unlimited power. It is dangerous because, eventually and inevitably, that power will fall into the hands of evil men.

And then what is to stop them from proclaiming themselves gods?

3 Responses to "North Korea: the nightmare of living under a god"