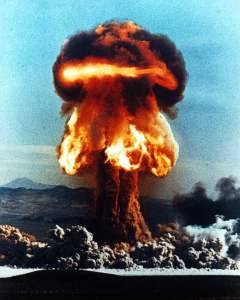 In the words of Bret Stephens below in the Prager University video, we must never allow Iran to get “the bomb,” because they are likely to use it:

All of what Stephens says is true, but the key is that the real power in Iran is held by millenarian fanatics who see it as their duty to bring about the Shiite “End Times.” To these people, the temptation to use nuclear weapons in fulfillment of what they see as a religious duty might well be irresistible.

What’s so very frustrating in this situation is that all too many see only a binary choice: either accept Iran as a nuclear power, or preemptively invade the country at a potentially tremendous cost in blood and treasure. There is a third way, though we’ve wasted much time.

My friend Michael Ledeen has often written about the brittleness and vulnerability of the Iranian regime, which lives in desperate fear of the people it rules. (If you’ve read any Iranian history, you’ll know why.) Here’s an example from a recent column:

The wreckage of the Iranian state is not just the result of corruption and incompetence;  it also derives from the intense infighting within the elite.  Unconfirmed stories have appeared in the Iranian press reporting phone taps organized by the Revolutionary Guards Corps against members of Supreme Leader Ali Khamenei’s inner circle, as well as against one another within the Guards.  There are documented fractures within the ranks of Hezbollah.  Assassinations continue apace, as in the case of Mojtaba Ahmadi, the head of the Cyber Army, in October.  The Iranian Embassy in Beirut was bombed in November by a terrorist group the Iranians had actually created.   And, in a telling blow to the regime’s ideology, Christianity is booming, and the regime is resorting to public meetings to warn the people about its dangers.

The regime does not seem to know how to cope with this crisis.  On the one hand, it increases repression.  The tempo of executions has famously increased since Rouhani’s election, and the recent brutality in Evin Prison–discussed by Ben Weinthal–shows that regime leaders are even afraid of prisoners.  For good reason:  last year many leading political prisoners refused to join the regime’s call for easing sanctions, despite torture and isolation.

It’s a hollow regime.  Its internal opponents hold it in contempt and do not fear it, and it is palpably failing.

Between acquiescence to a nuclear Iran and outright invasion lies the choice of aiding the democratic opposition, which is large and growing. In the 1980s, we undertook a similar program in Poland, aiding the anticommunist resistance both with non-lethal aid (radios, etc.), but also open, loud public support for the rights of the people against the regime they hated. It was part of a broader American-led effort to resist Soviet aggression, and it worked. The fall of Communism in Poland was the crack that eventually lead to the collapse of the whole Soviet Empire.

Something similar could well work in Iran, whose people are desperate for the only genuinely revolutionary nation on the planet to lend its still vast moral authority on behalf of a nation that wants to free themselves from the schemes of the mad mullahs.

We missed a great chance to do this in 2009, when massive street demonstrations brought the regime to the edge of collapse. When the world needed the moral clarity of Ronald Reagan, there was instead the diffidence of Barack Obama.

And now, five years and one farcical agreement later, Iran is that much closer to having a nuclear weapon. We had better hope that they don’t achieve it before 2017, when, we again hope, a new and competent administration comes takes over. One that will not fool itself about the dangers of an Iran with a nuclear bomb.

Because, otherwise, they will use it.