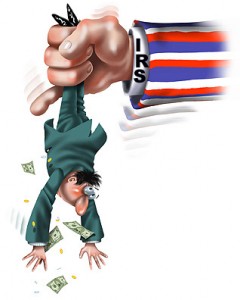 It’s as if the agency was worried it wasn’t hated enough.

Writing at Reason, Ira Stoll reports that the Internal Revenue Service is looking at taxing rewards points offered by airlines and hotel chains:

Just in time for your summer vacation, the IRS is getting ready to toughen the tax treatment on frequent flyer miles and hotel loyalty reward programs.

The IRS announced in 2002 that it wouldn’t try to go after individuals for income taxes on frequent flyer miles or hotel loyalty points earned on company-paid business trips. Yet the temptation to wring some tax revenue out of the vast non-dollar economy of Starwood Preferred Guest Starpoints, Marriott Rewards points, American Airlines AAdvantage miles, Delta Skymiles, and so on is apparently so great that that the government just cannot resist.

Sure enough, the Tax Foundation, a research group that tracks tax issues, flags a recent post on the View From the Wing blog that runs under the provocative headline, “The IRS Looks To Be on the Verge of Imposing a Big Tax Burden on Loyalty Points.”

The IRS’s plans are vague, but they have airlines and hotel owners concerned enough about the issue that they reportedly sent a letter to Treasury Secretary Jacob Lew. “The IRS’ proposal to alter the tax treatment of loyalty programs will impose a significant new tax on existing and future loyalty points that travel customers enjoy and rely upon,” said the letter, according to a report in Politico. “Any change or clarification of loyalty program accounting should be made through the legislative process, not IRS promulgation.”

Frequent flyer mile fanatics got a wake-up call on the issue back in 2012 when Citibank sent IRS Forms 1099, documenting “miscellaneous income,” at a rate of 2.5 cents a mile, to customers who had signed up for an American Airlines-branded credit card and gotten 40,000 AAdvantage miles as a bonus. It was an unpleasant surprise to cardholders who thought they were getting a free trip, not an unwanted extra tax bill.

I’ll say. I rarely rack up enough points for a free flight or hotel night, but I know plenty of people who fly a lot and who rely on those points to help cover the occasional vacation. Suddenly taxing them not only diminishes their value as a customer-retention tool, but also burdens the consumer by imposing a monetary cost for a non-monetary reward. (Sure, the points have “value,” but it’s not like real income. Just try paying for a meal with airline points…)

Stoll covers several problems with this plan, but I’ll add one of my own: this is another example of the gradual bureaucratic usurpation of legislative power that’s grown to be such a problem since the Progressive Era. Congress writes laws that allow regulatory agencies to create rules for their implementation, but agencies, like bureaucracies everywhere, constantly push the bounds of that authority to accumulate ever-greater power to themselves, to the point whereat they’re no longer writing rules, but actually making law in place of the elected legislature. Which, for progressive ideology, is a feature, not a bug. (1)

Although, perhaps “usurpation” is too strong a word. After all, congresses dominated by both Democrats and Republicans have gone along with this, even if they didn’t agree with progressive ideology, passing vague legislation and letting agencies “fill in the blanks.” It’s a tempting bit of laziness: as Washington accumulated more power to itself, Congress had to deal with more and more, until it became expedient to let someone else deal with the details. And it gives them political cover: It wasn’t your congressman who decided to tax your airline miles, it was the IRS. Left unsaid is how generations of congressmen and senators have enabled this.

Of the many reforms our government needs, congress reclaiming its power to make laws and reining in the bureaucracy —especially the IRS!— is high on the list.

Footnote:
(1) The basic idea is that democratically-elected legislatures are too prone to public passions, too full of unqualified people, to be trusted with governance. Progressives prefer unelected, dispassionate boards of technocrats who would practice scientific management of public affairs. They may be right about the problems of legislatures, but I think the last century has shown their solution is even worse.