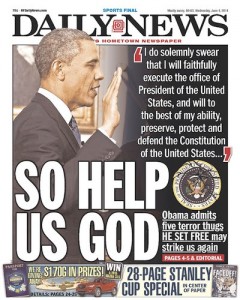 Mind you, this is from one of the liberal newspapers in New York City:

President Obama betrayed the highest obligation of his office — safeguarding national security — in trading five hard-core Taliban for the American serviceman who appears to have deserted in Afghanistan.

The five sworn enemies of the United States are now in the Gulf state of Qatar, where they are free to come and go as they like, beyond the watch of American agents. In just one year, they will be free to return to Afghanistan to fight there and stage terror attacks far beyond that country’s borders.

These facts were known to Obama when he made the deal, and yet he went ahead in irresponsible disregard for lives he has endangered. As the facts have emerged — and more surely will — it has become ever clearer that he lost his presidential compass in the Taliban swap.

In retrospect, his Rose Garden announcement that he was bringing home an American POW appears to have been a cynical act of theater.

In other words, a dog and pony show to distract from the VA fiasco. I can believe that.

Then, after dismissing Obama’s assurances about “keeping on eye” on these barbarians while they’re in Qatar, the NYDN delivers the killing blow:

Finally, Obama provided insight into the actual reason for the deal by placing it in the context of his drive to pull out of Afghanistan.

In other words, he wants out so badly that he accepted the Taliban’s terms, regardless of the threat to American security.

He is surrendering without honor.

Remember, this is from a major regional paper that’s generally on The One’s side. Can’t dismiss this one as “Faux News.”

What’s going on here, I think, is that even center-left outlets (1) are having trouble coloring this as anything other than a major “dereliction of duty” on the part of the president. They find themselves nodding in agreement with former federal prosecutor Andrew McCarthy at center-right PJM:

Is that the end of the matter? Not by a long shot. As I’ve also contended, the president’s failure to comply with a dubious statute is a mere footnote to his truly egregious offense: replenishing enemy forces at a time when the enemy is still conducting offensive terrorist operations against our armed forces. It would be difficult to fathom a more outrageous dereliction of duty by the commander-in-chief.

Moreover, if you want to fret over statutory violations, I would spend less time on the 30-day notice law and more on the federal criminal law that makes material support to terrorists a serious felony. The president has knowingly provided personnel—key, experienced, highly effective jihadists—to terrorist organizations that are still very much at war with the United States. That is material support to terrorism.

What Obama did was the equivalent of Eisenhower capturing senior North Korean and Chinese generals and then returning them while the fighting in Korea was still going on. If Ike were an idiot, that is, which he wasn’t.

In New York City, a metropolis that’s been the victim of catastrophic terrorism, even a paper as reliably liberal as the Daily News can’t help but scream “What in God’s name do you think you’re doing??”

If Team Unicorn expected any kudos for this “deal,” they must be gravely disappointed.

PS: Jim Geraghty, from whom I took the graphic, has an interesting article on impressions confirmed and disproved by the Bergdahl deal. Also via Jim, is Obama so sick of being president that he’s dropping hints he may resign if the Republicans win the Senate in November? Check this out:

Obama tells anxious Democrats that there is only so much he can do beyond fundraising and better implementing the health-care law. But he also has told allies that losing the Senate to Republicans would make his last two years in office unbearable . . .

“I don’t really care to be president without the Senate,” Obama said, according to attendees, signaling that he knew the health care debacle created resentment among Democrats and that he wanted to make amends.

As Allahpundit likes to say, “Hmmm….”

Footnote:
(1) Other than MSNBC, which will be the network of Obama lickspittles until the End of Days.

UPDATE: At The Federalist, Robert Tracinski asks a darned fine question — “Why Are We Releasing Terrorists Who Kill Girls Because They Go To School?”