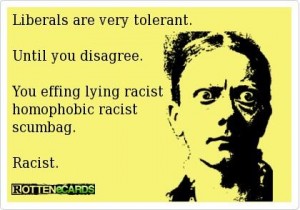 If you’re a conservative, or just someone who thinks everyone should be treated equally, you’ve probably been called a racist at one point or another. And if, like most people, you’re a decent person, you’ve probably been taken aback and left wondering if maybe, subconsciously, you did hold beliefs and attitudes that were racist.

Stop wondering. You’re not. In fact, as Derryck Green of Project 21 explains in this Prager University video, it’s the American Left that harbors the racist attitudes, rooted in the assumption that Blacks just can’t compete, the infamous “soft bigotry of low expectations:”

So, relax. You’re not racist for believing we can all be held to the same standards. Far from it.

6 Responses to "(Video) Who are the real racists: liberals or conservatives?"