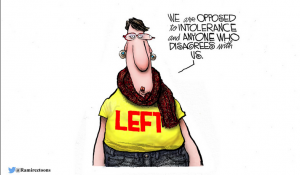 “I know there is an authoritarian Left in this country, and I fear it.”

(Preface: I should clarify something from the start — I am not a religious person. Born and raised Roman Catholic, I haven’t been to a Mass for anything other than a wedding or funeral in over 35 years. While I respect the Church (and most other faiths) and the opinions of the faithful (Well, most of them), I feel no need or urge to go to church on Sundays or offer up my voice in prayer; the existence or not of God is not of great importance to me, though I don’t doubt that God exists in some form. Neither atheist nor agnostic, perhaps the best description for me is “apatheist.” I just don’t care.

What I do care about passionately, however, is the promise of the American Revolution, the political and social settlement represented in the Declaration of Independence and the Constitution, and the freedom of all decent people to live their lives as they see fit without fear of being picked on or persecuted for who they are. What I write below should be read in that context.)

What happened in Indiana over the last week was an utter, damnable disgrace, and a good portion of this nation should be ashamed of themselves for acting like a digital lynch mob.

How did this start? A bit over a week ago, the Indiana legislature passed a bill, similar to a federal act and laws in 19 other states, allowing defendants in lawsuits, including those brought by non-governmental actors, to offer religious belief as a defense when accused of discrimination. It was not a “safe harbor” or anything that precluded a suit or encouraged discrimination. A court still had to determine whether the professed religious defense was outweighed by a pressing state need. Its only purpose was to provide a possible shield to those who felt their religious beliefs were being trampled. (Further essential reading.)

The reaction to the bill made one wonder if Indiana hadn’t opened death camps for gays.

The hysteria generated by progressive reactionaries and other fools who I’m sure didn’t read the bill was appalling to behold. Monumental hypocrites such as Apple’s gay CEO Tim Cook roundly denounced Indiana for bigotry against gays and for denying their rights… while Apple makes iPhones in Communist China and sells them in Iran, where gays are regularly murdered by the state for being gay. Other ignoramuses called for the NCAA basketball tournament to be moved from Indiana next year, or ran to the microphones to condemn Indiana while pretending their own state’s RFRA didn’t exist..

Eventually the pressure from the howling horde of progressive corporate execs, the MSM, and “activists” proved too much for the cowardly lions in the Indiana legislature and their jelly-spined governor, and they amended the Religious Freedom Restoration Act to gut its provisions. The mob had won, and the democratic will of the people as expressed through their elected representatives was left beaten and bleeding in a back alley. If that were the end of it, it would be bad enough.

During the week of furor over Indiana’s RFRA, a “reporter” at ABC’s Channel 57 affiliate in Indiana,  Alyssa Marino, went looking for mouth-breathing, hate-filled homophobes who would refuse service to homosexuals.

And she found them at Memories Pizza

You can read Scott Ott’s report on how the media created the Hell that was about to descend on the O’Connors, owners of “Memories.” But I want to point out one especially egregious example,  a tale of two headlines: 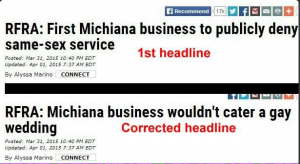 The top is the first headline to run over Marino’s story, and below is the “corrected” version. See the enormous difference between the two? The first claims the O’Connors declared a blanket denial of service to gays. Pretty despicable, right? The later limits that to catering a gay wedding. (And who would order pizza for a wedding, anyway?) But, here’s the kicker: Marino’s question to Crystal O’Connor was wholly hypothetical! There was no gay couple seeking pizza for their wedding. Marino has simply walked in and asked a question along the lines of “What would you do if…?” O’Connor then made the mistake of answering honestly: gays would be welcome to eat at the restaurant, presumably also to get takeout or delivery, but that her business would decline to cater a wedding because it would require them to participate in an activity that went against their Christian faith. Again, a hypothetical answer to a hypothetical question. The hypothetical gay couple could then go to another pizza parlor for catering, which would profit.

No. This was the crime of “wrong thought,” and for that the O’Connors became vragi naroda, “enemies of the people.” Thanks to the media and the firestorm ignited on the Internet, Memories Pizza’s social media presence was attacked, and threats of violence, arson, and even death were received. It got so bad the O’Connors closed their shop and went into hiding. While through the efforts of Dana Loesch and her crew at The Blaze TV, the O’Connors more then recouped their losses (1), one has to ask: Did they really deserve this for simply holding an opinion not popular with our media and urban elites?

Of course not! What happened to Memories Pizza and to the Indiana government was disgusting: Thinking they had found their new Emmanuel Goldstein, the ignorant, reactionary Left began with a ritual Two Minutes Hate and ran with it until it became nearly a sexual ecstasy of rage. The state government was intimidated, a couple was left in fear for their lives, and the rights of people to freedom of conscience and freedom of association were torn apart in a political Bacchanalia.

There is a sickness in our body politic, one brought about by the authoritarian Left the late Senator Moynihan cited at the start of this article. One key component of the American settlement is the idea of political and religious tolerance, that we can all hold different beliefs –and we don’t have to like those beliefs or even each other– but not be punished for them. Our English forebears, Catholics and Protestant Dissenters, experienced just that sort of oppression and came to a New World to escape it. Later it was the Jews fleeing persecution in Europe; a letter from President Washington to the Jews of Newport, Rhode Island eloquently describes that idea:

The citizens of the United States of America have a right to applaud themselves for having given to mankind examples of an enlarged and liberal policy—a policy worthy of imitation. All possess alike liberty of conscience and immunities of citizenship.

It is now no more that toleration is spoken of as if it were the indulgence of one class of people that another enjoyed the exercise of their inherent natural rights, for, happily, the Government of the United States, which gives to bigotry no sanction, to persecution no assistance, requires only that they who live under its protection should demean themselves as good citizens in giving it on all occasions their effectual support.

May the children of the stock of Abraham who dwell in this land continue to merit and enjoy the good will of the other inhabitants—while every one shall sit in safety under his own vine and fig tree and there shall be none to make him afraid.

Emphases added. Washington, I’m almost certain, would be nauseated by what happened this last week.

What the authoritarian Left is doing strikes at the heart of the American settlement by refusing to honor the “liberty of conscience” we have long made room for in this land. Remember the conscientious objectors of the Vietnam War era (and earlier wars), who refused to engage in combat because of religious objections? Then, the Left lionized them as heroes. Would they now be spat upon because they used religion as a defense? It was for moments like these, when the power of the State impinges on the deeply felt religious beliefs of people, whether in matters of war or simply participating in a wedding, that Congress passed nearly unanimously and President Clinton signed the federal RFRA, and the states followed with their own.

But the Left leaves no room for dissent, unless it is dissent they approve of. All others are not just disapproved of, but must be actively harassed and punished until they publicly recant and think right thoughts, like some Maoist “struggle session.”

I’m going to close with a long quote from attorney Kurt Schlichter, who served many years in the Army, including Kosovo, where he saw first hand what happened when the consensus of tolerance broke down:

Which brings us to America in 2015. It’s becoming a nation where an elite that is certain of its power and its moral rightness is waging a cultural war on a despised minority. Except it’s not actually a minority – it only seems that way because it is marginalized by the coastal elitist liberals who run the mainstream media.

Today in America, we have a liberal president refuses to recognize the majority sent to Congress as a reaction to his progressive failures, and who uses extra-Constitutional means like executive orders to stifle the voice of his opponents. We have a liberal establishment on a secular jihad against people who dare place their conscience ahead of progressive dogma. And we have two different sets of laws, one for the little people and one for liberals like Lois Lerner, Al Sharpton and Hillary Clinton, who can blatantly commit federal crimes and walk away scot free and smirking.

The Left is discarding the rule of law for the rule of force, substituting the power of the mob for the “immunities of citizenship,” and while you may think it silly to compare America to Kosovo, it may also be that Col. Schlichter has simply reconnoitered farther down the road they want us to walk and seen where it ends.

“I know there is an authoritarian Left in this country, and I fear it.”

And we should, still.

Footnote:
(1) Fair disclosure: I was one of the donors and was honored to do so.

RELATED: The Power Line podcast has an excellent discussion of the Indiana situation, and RFRAs in general, with law professor John Yoo.

5 Responses to "The Indiana #RFRA, Memories Pizza, and the Left’s Fascist Orgasm"