(Note: Please make sure to read all the way to the end of this post to get the ‘punchline’ – Thanks

He arrived today, just before lunchtime. The one I’d been waiting for.

When he first came into my office, I was momentarily taken aback. I had expected him to make his trip to the office sometime late this afternoon. I would learn later that he was so eager to meet me, that he couldn’t wait another day.

It didn’t take long for me to get over my initial shock, but once I did, we stared at each other intently for what seemed like forever. We didn’t say much … barely had the time for introductions, as I was slammed midmorning with things to do, and he was busy getting acclimated to the surroundings. But that didn’t stop us from sizing each other up every chance we got.

I’d steal a glance when the opportunity presented itself, as would he. What I liked most about him from the start was how strong he appeared on the outside. He had a rough exterior, but on the inside I knew he was more gentle and smooth than his appearance let on.

My heart was racing. I eagerly looked forward to 5 o’clock, because I couldn’t wait to get in the car with him. I was also well aware that the night ahead was full of promise.

My mind whirled. ‘Once we get in the car, what will I say?’ I asked myself

He must have caught on to my nervousness, because not soon after we made it to the car, he announced that he would be sitting in the back seat for the ride home. He’s a rather stout fellow, and figured he’d be more comfortable in the back than scrunched up in the front seat of my car. ‘We’ll have plenty of time to hold hands later on,’ he assured me. I was somewhat disappointed, but didn’t want to appear disagreeable, so I refrained from protesting. I knew he was right. I couldn’t very well focus on him and the road as well (unlike SOME people).

On the ride home, not much was said – and my mind continued to whirl. ‘Will he like my home?’ ‘How will he react when we go upstairs?’

I drove it home in record time. Before I got out of the car, I took a deep breath. Chip, who appeared calm, cool and collected, once again seemed aware of my unspoken fears. The look he gave me said it all: ‘Relax. Everything’s going to work out just fine.’

With that in mind, we proceeded to the front door. It was like we couldn’t get inside the house fast enough. Breathlessly, we skipped over what would have been a mini-tour of the downstairs and headed upstairs immediately. We didn’t want to wait a moment longer.

Once we made it upstairs, Chip reminded me that before we could get serious, I had to retrieve from his predecessor some things that belonged to me. Dang. He was right again.

So we won’t be getting serious tonight. Probably for the best, considering how worn out we both are from the emotions of the day, and the anticipation of the days – and hopefully years to come. We’ll be getting much better acquainted this weekend, once I’ve the time to obtain my belongings from the one before.

Chip’s shy, but I did manage to snag a picture of him while he wasn’t looking. So, everyone, meet Chip, Jr.: 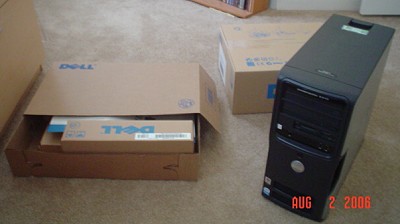 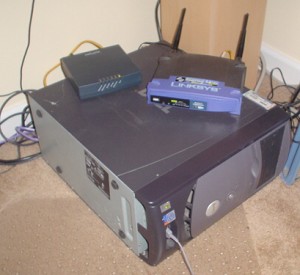 As you can see from the above pic, Chip Sr. is exhausted to the point now where he has to lay on his side. Years of heavy-duty activity between the two of us has made him that way. We’ve discussed this, and I’ve expressed my remorse, but he always shrugs off my apologies by telling me simply, “I was born for this.”

One more Chip who always gets it right.

Sr. grumbled at first sight of Chip Jr. this evening and puffed out his chest a bit in defiance – but Chip Jr. assured him that he, being in peak physical condition, would take excellent care of me day and night. I also made sure that Chip Sr. knew that tonight would not be our last night together – that we’d have two more evenings of laughs and hands-on activity before we said our goodbyes. That seemed to put him at ease.

Chip Jr. is now resting, while Chip Sr. and I have started reminiscing about days gone by, savoring the memories. And reluctantly, he’s giving me those items that belong to me which have been in his possession for so long.

Here’s to you, Chip Sr. And to Chip Jr., I’ll be counting the hours til the weekend …