The inspector-general for the National Archives has just released a report detailing what former National Security Advisor under President Clinton Sandy Berger did with those highly classified documents he was caught taking from the National Archives. Josh Gerstein at the NY Sun reports:

The report from the inspector-general for the National Archives, Paul Brachfeld, said Mr. Berger executed the cloak-and-dagger maneuver in October 2003 while taking a break from reviewing Clinton-era documents in connection with the work of the so-called September 11 commission.

” Mr. Berger exited the archive onto Pennsylvania Avenue,” the report says, recounting the story the former national security chief told investigators. “He did not want to run the risk of bringing the documents back in the building. â€¦ He headed toward a construction area on 9th Street. Mr. Berger looked up and down the street, up into the windows of the archives and the DOJ, and did not see anyone. He removed the documents from his pockets, folded the notes in a â€˜V’ shape, and inserted the documents in the center. He walked inside the construction fence and slid the documents under a trailer.”

According to the report, Mr. Berger said he retrieved the documents after leaving the archives complex for the evening and took the papers to his office. It is not clear how long the documents were unattended at the construction site, but the report suggests it was a few hours, at most.

The former national security chief said he cut three documents up in his office and discarded them in the trash. Mr. Berger returned two other documents after archivists notified him that some records were missing, but his efforts to retrieve the others from the trash collector were unsuccessful.

All five documents Mr. Berger removed were versions of an after-action report about the foiled “millennium plot” to bomb the Los Angeles International Airport and other sites. The internal review, by a top counterterrorism official, Richard Clarke, reportedly found that luck was the major factor in disrupting the plot and that more attacks were likely.

Mr. Berger has admitted placing classified documents and his notes, which were also presumed classified pending a review, into his suit pockets to carry them out of the archives. However, the inspector general’s report resurrects claims that Mr. Berger may have removed some papers by placing them in his socks.

An archives staffer reported that Mr. Berger took frequent bathroom breaks and was seen in a hallway “bent down, fiddling with something white, which could have been paper, around his ankle.”

The revelation of all these details makes Berger’s slap on the wrist last year all the more appalling:

WASHINGTON (CNN) — Former National Security Adviser Sandy Berger was sentenced Thursday to community service and probation and fined $50,000 for illegally removing highly classified documents from the National Archives and intentionally destroying some of them.

Berger must perform 100 hours of community service and pay the fine as well as $6,905 for the administrative costs of his two-year probation, a district court judge ruled.

Call me a right-wing paranoid â€“ it’s been done before! â€“ but I think that, if Sandy Berger were a conservative Republican, the story of his criminality would be a really, really big deal.

Indeed, it would. Can you imagine if Condi Rice had been caught walking out of the National Archives with highly classified documents? There would be blood-curdling screams of “JUSTICE NOW!!!” from the usual suspects demanding to know what “secrets” the oh so secretive Bush admin were trying to hide. As it stands, this story barely even gets a mention from the NYT, as they use the AP wire service’s report on it instead of writing their own (as Scott Johnson notes).

Almost everytime I blog about something related to Bill Clinton or his administration I get emails from liberals telling me to “get over” my “obsession” with Bill Clinton – “he’s not president!” they say. No, he’s not, but the fact that he’s not president anymore doesn’t make what he and/or anyone in his administration say or do now off limits for discussion. Sandy Berger stole highly classified documents from the National Archives by stuffing them in his pants and socks and hiding them under a construction trailer. Whether they were copies or not doesn’t matter (again, via Nordlinger):

It could be that Berger performed a real service in stealing and deep-sixing documents â€“ that is, a service to the Clinton administration. (I warned you this would be a paranoid item.) Berger’s lawyer â€“ remember Lanny Breuer, of Lewinsky fame? â€“ says there’s no need to fret: The 9/11 Commission received all the documents it should have; Berger deprived the commission, and therefore the nation, of nothing.

Tom Davis, the Republican congressman â€“ and chairman of the House Government Reform Committee â€“ isn’t so sure. Here’s what he says: “There is absolutely no way to determine if Berger swiped [certain] original documents. Consequently, there is no way to ever know if the 9/11 Commission received all required materials.”

I will never forget Bill Clinton’s response when he found out what Berger had done:

In an interview with the Denver Post, Clinton stuck to the most “innocent explanation,” that Berger’s just a slob. “We were all laughing about it on the way over here,” he told the paper. “People who don’t know him might find it hard to believe. But … all of us who’ve been in his office have always found him buried beneath papers.”

Yeah, I find it very hard to believe. In fact, impossible to believe. You don’t take and then hide classified national security documents in your pants and under a construction trailer for no reason.

I’ll never forget this picture, either: 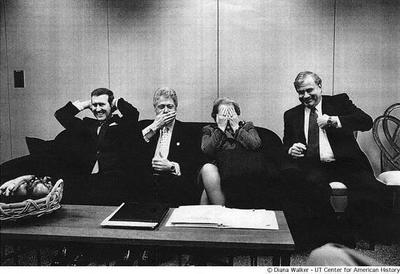 The Clinton approach to terrorism: Hear no evil, speak no evil, see no evil, do nothing about evil

IMO, the real explanation is that Berger knew it was Clinton adminstration legacy time (in front of the 9-11 Commission), and he had to do what he needed to to preserve it. Berger, Richard Clarke, and Clinton all want Americans to believe that the millenium terrorist threat against LAX was thwarted because of Clinton admin counterterrorism policies. But we know otherwise.