… just in time for her presidential run:

Of all the early problems Bill Clinton faced as president, few stand out to Senator Hillary Rodham Clinton as more frustrating and avoidable than his rocky relationship with the military, her advisers say.

During his 1992 campaign, Mr. Clinton was attacked for avoiding the Vietnam draft and organizing antiwar marches in the 1960s. After taking office, his early focus on gay men and lesbians in the military drew sharp criticism from the chairman of the Joint Chiefs of Staff, Colin L. Powell, and other officers. Even his ability to salute properly was called into question.

Mrs. Clinton, to use a phrase, has been practicing her salute. As a senator and now as a presidential candidate, she has cultivated relationships with generals and admirals, prepped herself on wartime needs and strategy, and traveled to Iraq and Afghanistan.

“I think eight years in the White House, traveling the world and seeing the United States military doing the nation’s business, and now her time in the Senate, has given her a significant appreciation of the military that maybe her husband didn’t have before the White House” said Jack Keane, the retired general and former Army vice chief of staff who has become close to the senator.

For Mrs. Clinton, exhibiting a command of military matters is not just about learning from her husband’s experience. It could be vital to her, as a woman seeking to become a wartime commander in chief, to show the public that she is comfortable with military policy and culture — and with the weight of responsibility that accompanies life-and-death decisions.

It is also part of an effort to shed the image some voters hold of her as an antimilitary liberal, defined by her opposition to the Vietnam War and, now, by her criticism of the Bush administration’s conduct of the war in Iraq.

La Clinton must think the men and women in our military are as dumb as Rep. Charlie Rangel routinely makes them out to be if she honestly thinks she’ll ever win over a significant amount of military support. The military hasn’t forgotten the disdain for the armed services Bill and Hillary displayed while Bubba was Commander in Chief, nor will they forget that her husband dodged the draft during Vietnam. They also won’t forget her carefully crafted “If I knew then what I know now” position on Iraq, a position she’s taken solely for political purposes aimed at catering to the Nutroots left, in spite of her trying to soften her tone on the Iraq war a few months later.

I think this photo of the Senator with a soldier from the US Army says it all: 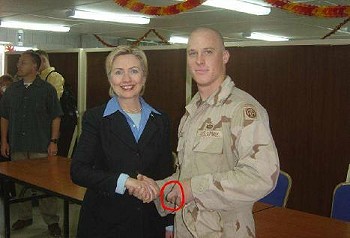 The gesture of crossing one’s fingers is not unique to the military, of course; it is an ages-old symbol used to indicate that the finger-crosser does not mean what he is saying or is being compelled to act through coercion. (A typical kiddie trick is to surreptitiously cross one’s fingers behind one’s back while making a promise, a token that supposedly shields the finger-crosser from the obligation of upholding the terms of his oath.) The implication of the photograph shown above (which began circulating on the Internet in early 2004 and was taken at one of the military facilities New York senator Hillary Clinton visited in Iraq during the Thanksgiving 2003 holidays), then, is that despite the smiling faces and friendly hand-shaking captured in the picture, the soldier is communicating that he is not really all that pleased to be meeting Senator Clinton.

The “not really all that pleased” assessment is evidently accurate — although the picture originally appeared without any accompanying text, and the “coercion” caption was only added later to make the humor of the photograph more explicit — as the soldier pictured with Senator Clinton (who asked that we not identify him by name) told us that he employed the gesture to indicate that he was not a fan of the senator’s and was not as appreciative of having the opportunity to meet (and pose with) her as it might otherwise appear.

US men and women serving might feel compelled by their superiors or bound by a sense of duty to take a picture with an opportunistic politician, but thankfully there is no coercion involved in going to the ballot box, where the military consistently votes around 65% Republican (something Democrats know to the point of trying to suppress their votes in 2000).

17 Responses to "Hillary “cultivating relationships” with the military"