(Keep refreshing this post as I will be liveblogging the debate)

CBS predicts that Iraq will be the issue which dominates tonight’s debate in Orangeburg, SC at SC State University.

Did you get a chance to submit your questions for the candidates via MSNBC?

The debate starts at 7 pm tonight and will be broadcast on MSNBC.

Not near a TV? You can watch the video here (you’ll have to watch a 15 second ad first). I’ll watch as much as I can, but I have a hard time sitting through anything that includes John Edwards, the ultimate actor-politician.

Update I: Every candidate so far has essentially said “we need to get out now.” Shocker! Bill Richardson said that if he had been in Congress he’d call for ALL troops to be out by the end of this year.

Update II: Obama “We are one vote away from this war being over.” Is talking about trying to write a bill that would be veto-proof.

Update III: Senator Clinton lies by saying that the President hasn’t “changed course” and that there has been “no progress in Iraq.”

Update IV: John Edwards in response to haircut question: “I’ve not forgotten where I come from.” Plays the “I’m from SC” card. Gag. He’s addressing the hedge fund issue I blogged about yesterday.

Just asked Governor Richardson about his statement about Alberto Gonzales where he said he was making up his mind about Gonzales and had a hard time doing so because Gonzales was Hispanic.

Update VI: Williams asked Dodd about how he could complain about the culture of corruption yet take tons of money from lobbyists. He’s not really answering the question.

Update 7: Kucinich said the campaign was like “American Idol” – LOL.

Update 8: Senator Biden answes a simple “yes” to Williams’ question about whether or not he can assure the American people he’ll be, essentially, gaffe-proof.

Update 9: (Former) Senator Gravel (D-Alaska) is flipping out over the stances of the other candidates on Iraq. He’s very animated.

Update 10: Williams is questioning Edwards on abortion, specifically PBA. Thinks the Justices were being activist in their decision on PBA.

Senator Joe Biden says there is a ‘right to privacy’ in the Constitution. Strongly supports Roe. v. Wade. Says the PBA decision was “intellectually dishonest.” What about the global warming decision, Senator? Or the Gitmo decision? The Phillip Morris verdict?

Update 11: Ginsburg to several Dems is a ‘model’ USSC justice.

Update 12: Clinton has asserted that the VTech killer Cho was “involuntarily” committed – I didn’t think that had happened. Can someone help me out with that?

Update 13: Senator Edwards is explaining why he wants to raise taxes to pay for his healthcare plan. He will, of course, raise them on the rich.

Update 14: Obama is another who wants nationalized healthcare.

Update 15: Senator Biden is being asked why Democrats are in SC when the NAACP is boycotting the state. Biden says this is the chance for SC to show off its strength. Obama is saying that this debate gives voters opportunties to see who the candidates are.

Update 16: Question asked: what’s your worst political move and what did you learn from it? Kucinich said he fired the mayor of Cleveland on the evening news. Obama said he regrets leaving the Senate when the Schiavo bill was being debated. Biden: Overestimating the competence of the admin and underestimating their arrogance. Edwards: The vote on the war. Hillary: Healthcare in the 90s, believing the admin on WMD. Bill Richardson: Changing his state ‘too rapidly’ (whatever that means).

Update 18: John Edwards goes green, says Americans should be ‘patriotic’ about something ‘other than war.’

Update 19: What’s the first thing you want to accomplish on your first day in WH? Richardson: First day would get us out of Iraq. Second day, would make us ‘energy independent’.

Update 20: Final half hour is getting ready to roll.

Senator O: Three most important allies are the EU, NATO, the “East.”

What about Israel? Williams brings up his comment about the Palestinian people and how Obama said ‘no one has suffered more than’ – Obama is trying to weasel out of that comment.

Update 21: Biggest threat to US, per Biden: North Korea, Iran, Putin in Russia. Says we need to ‘talk’ to people rather than consider ‘regime change.’ Lies about Iraq and whether or not they gave up their WMD prior to us invading. Senator Gravel said ‘we have no enemies’ – we need to start treating all countries as equal. Says the military ‘controls’ our culture.

John Edwards on Russia: The gov’t has been ‘centralized’, opposition ‘squashed.’

Biden brings up Darfur and wonders why we aren’t doing anything.

Williams asks Clinton about Giuliani’s comments on Democrats taking us to a pre-9/11 mentalit if one is elected President. Hillary is presenting herself as an ‘ignored savior’ of the country with ‘national security prroposals that have been ignored.’ Says administration has ‘hyped the fear’ we face.

Dodd gets same question: It’s a ‘myth’ that Democrats are weak on national security. “Stateless terrorism” is a ‘multi-national’ problem and so is the absence of diplomacy. Doesn’t really answer Williams’ question.

Question: Do you believe there is a global war on terror? Four candidates raised their hands. Hillary Clinton was one, Dodd was another, Richardson was another and I think Obama did, too.

Update 22: Hillary was wrong on the involuntary committment comment re: Cho.

Update 23: Obama is talking about how he would handle a potential future threat and change our ‘military presence’ overseas. Would deal with international community – basically takes the Kerry position.

Update 24: Edwards “we have more tools available than just bombs.”

Clinton: More whining about diverting attention to Iraq. Must focus on those who do threaten us rather than those who don’t. Does that mean Darfur is off the table?

Update 27: Kucinich took Obama to task for his ‘all options are on the table’ comment re: Iran. Obama is rebutting Kucinich now saying Iran is indeed a threat-Kucinich is saying it IS disputed as to whether or not Iran is arming itself with nukes. This has been the only real interaction between the candidates throughout the debate.

Update 28: Gravel says it’s the US’ fault that Iran is arming itself, and the US is violating the nuclear prolif. agreement (this dude is the biggest moral relativist on the panel).

Update 29: Edwards has trouble answering the question of ‘who is your moral leader.’ Took him ten seconds to say he wasn’t sure who his moral leader was before saying “God, my wife, my dad.” He should have just said “myself.”

Update 30: Clinton’s developing a slight southern accent talking about Walmart and living in Arkansas. Says Walmart is a ‘mixed blessing’ and that the poor and middle class are ignored by the administration.

Update 31: Williams asks Biden if his party will become extinct if the Dems lose in the presidential election. Biden says no, that there are a bunch of winners on that stage. Also says Darfur is necessary.

Update 35: Debate is over. Republican debate will be next Thursday.

Update 36: My initial impressions are that political junkies learned nothing new tonight from the debate, outside of getting to know Gravel a lot better – LOL. There wasn’t a lot of interaction between the candidates and I think that’s the way Williams and co. wanted it. A lot of the responses were canned, but made for good soundbites for Democrats who are still undecided. I really can’t get over the length of time it took John Edwards to answer the question about who he considered to be his moral leader. Just proves what a pompous self-important twit he is. I really do believe if he were to answer it honestly he’d say “you’re looking at him.” 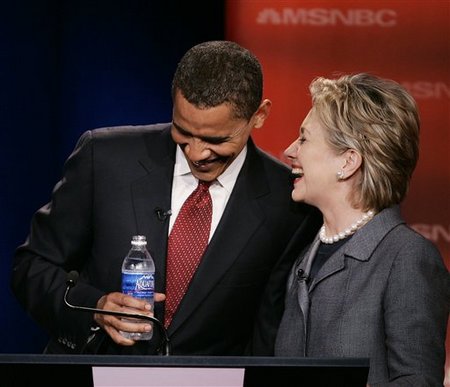 Update 38: Guess how was throwing the race-card tonight re: the VTech massacre before the debates started? Via Drudge:

Update 39: The AP has a recap of the debate here.

I love having Gravel and Kucinch there. It’s like the two drunks at the party. Before the end, Gravel is going to take a swing at whoever’s at the next podium.

He liveblogged the debate, too. Go here and scroll for his play by play and commentary.

Update 41: The Associated Press reports how the Dem candidates were transported to the debates: via private jets:

No one jet pooled, no one took commercial flights to save money, fuel or emissions.

Update 42: Local Charlotte station WCNC has posted a transcript of the debate, the first one I’ve seen. Way to go, CNC!

They’ve also got some video clips, too.

Fri AM Update: Mega-list of news and blog links on last night’s debate can be seen via Memeorandum.

A SurveyUSA poll showed Obama as the ‘clear winner’ in the debate at 31%, with Hillary at 24%.

Here’s video of one of the more humorous moments of the night – a one word answer from Biden to a question from Brian Williams about his “verbosity” (h/t Allah):