Here (sub. req’d) is what the slick Senator from North (or is it South?) Carolina won’t tell you on his campaign stops where he discusses ‘declining wages’ (emphasis added):

It’s been a rough week for John Edwards, and now comes more bad news for his “two Americas” campaign theme. A new study by the Congressional Budget Office says the poor have been getting less poor. On average, CBO found that low-wage households with children had incomes after inflation that were more than one-third higher in 2005 than in 1991.

The CBO results don’t fit the prevailing media stereotype of the U.S. economy as a richer take all affair — which may explain why you haven’t read about them. Among all families with children, the poorest fifth had the fastest overall earnings growth over the 15 years measured. (See the nearby chart.) The poorest even had higher earnings growth than the richest 20%. The earnings of these poor households are about 80% higher today than in the early 1990s.

What happened? CBO says the main causes of this low-income earnings surge have been a combination of welfare reform, expansion of the earned income tax credit and wage gains from a tight labor market, especially in the late stages of the 1990s expansion. Though cash welfare fell as a share of overall income (which includes government benefits), earnings from work climbed sharply as the 1996 welfare reform pushed at least one family breadwinner into the job market.

Earnings growth tapered off as the economy slowed in the early part of this decade, but earnings for low-income families have still nearly doubled in the years since welfare reform became law. Some two million welfare mothers have left the dole for jobs since the mid-1990s. Far from being a disaster for the poor, as most on the left claimed when it was debated, welfare reform has proven to be a boon.

The report also rebuts the claim, fashionable in some precincts on CNN, that the middle class is losing ground. The median family with children saw an 18% rise in earnings from the early 1990s through 2005. That’s $8,500 more purchasing power after inflation. The wealthiest fifth made a 55% gain in earnings, but the key point is that every class saw significant gains in income.

Here’s that graph mentioned in the piece: 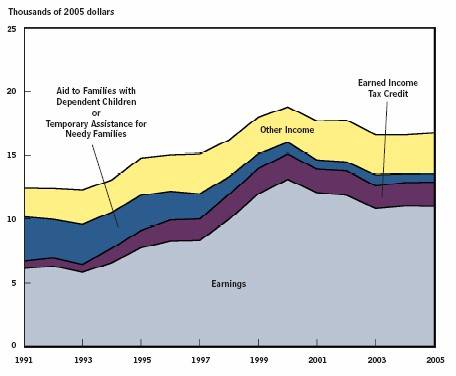 Wow. So, like, this means Republican ideas on how to stimulate the economy and get people back out into the work force actually work? Who’da thought?!

Bbbbut wait. Hedge-fund Johnny’s gonna change all that! Right after he: asks you to send him money to help him stop the war, stops pandering to the likes of the “Reverend” Al Sharpton, investigates a claim made by a 9-11 Truther about the collapse of WTC7, and spends yet another $400 on a hair cut and salon visit. 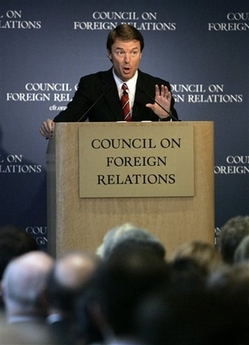 “Help is on the way!