The attacks on Fred Thompson continue in this weekend’s lamestream media outlets. Yesterday it was the LAT, and today it’s the NYT:

AS the election of 2008 approaches with its cast of contenders who bring unprecedented diversity to the quest for the White House, the voting public has been called on to ponder several questions: Is America ready for a woman to be president? What about a black man? A Mormon?

Now, with the possible candidacy of Fred D. Thompson, the grandfatherly actor and former Republican senator from Tennessee, whose second wife is almost a quarter-century his junior, comes a less palatable inquiry that is spurring debate in Internet chat rooms, on cable television and on talk radio: Is America ready for a president with a trophy wife?

The question may seem sexist, even crass, but serious people — as well as Mr. Thompson’s supporters — have been wrestling with the public reaction to Jeri Kehn Thompson, whose youthfulness, permanent tan and bleached blond hair present a contrast to the 64-year-old man who hopes to win the hearts of the conservative core of the Republican party. Will the so-called values voters accept this union?

Mr. Thompson, who needs the support of early primary voters, is expected to formally announce his candidacy any day now. Meanwhile, much of the brouhaha around Mrs. Thompson, 40, is being stirred by photos of her in form-fitting gowns circulating on the Internet.

“You have a situation where a candidate happens to have an attractive wife, therefore it’s open season for smutty thoughts and lowbrow humor, and no concern for the fact that this is a wife and mother, a professional woman?” said Mark Corallo, a former Justice Department official who is a consultant and the chief media adviser to the Thompson campaign. “One picture on the Internet and all of a sudden she’s reduced to being a bimbo?”

On a morning cable news show last month, Joe Scarborough, the commentator and former Republican congressman from Florida, compared Mrs. Thompson to a stripper. The comment came after a segment on the use of stripper poles in exercise routines, but it still stung. It is hard to imagine a man, however handsome, suffering similar insult.

THE term “trophy wife” was coined by Fortune magazine in 1989 and immediately entered the language. Although it often has a pejorative spin, the term originally meant the second (or third) wife of a corporate titan, who was younger, beautiful and — equally important — accomplished in her own right, which describes Mrs. Thompson.

Now let’s talk about the form-fitting gowns. Or let’s not. The clear implication is that Jeri Kehn is some sort of a trollop who married for power on the basis of her beauty, which is ridiculous. Saulny faults the Thompsons for not officially distributing her resume, but anyone with access to Google knows that Mrs. Thompson worked as an attorney and media consultant in DC, as well as a staffer at the RNC and on the Senate Republican Caucus. She’s no bubble-headed bleach blonde, but someone with her own record of accomplishment — even if the New York Times and Susan Saulny apparently can’t find it with both hands and a flashlight.

That’s what makes the “trophy wife” slam so obnoxious. Saulny even tries to weasel past her use of it by telling readers that Fortune Magazine’s original definition included accomplishment, but that probably lasted as long as that particular issue did on the newsstands. When people talk about trophy wives now, they mean arm candy — beautiful but vapid social climbers with nothing more to offer than cleavage. Jeri Kehn Thompson does not qualify as a trophy wife. Does Susan Saulny qualify as a trophy reporter?

Nope, but I’d say she qualifies for a top editorial position at the snoozepaper of record, what with writing anti-conservative hit pieces like this one.

Via an outraged Joe Gandleman.

Updating to add this picture – another one I forgot I had: 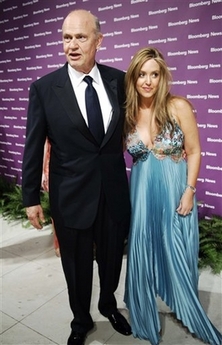 Fred Thompson and his wife Jeri.

12 Responses to "How low can they go: The NYT describes Fred Thompson’s wife as a “trophy” wife"