Fresh on the heels of finding out that ranking Democrats knew of the CIA’s videotaping of aggressive interrogation techniques of suspected terrorists, and the later destruction of two of those tapes – all the while doing nothing about it, anti-Bush liberals learned today via the Washington Post (h/t: Jimmie) that in secret briefings dating back to 2002, ranking Democrats raised no objections to the now-discarded practice of “waterboarding,” an interrogation technique Democrats have held over the administration’s head for the past couple of years as an example of “torture” (emphasis added):

In September 2002, four members of Congress met in secret for a first look at a unique CIA program designed to wring vital information from reticent terrorism suspects in U.S. custody. For more than an hour, the bipartisan group, which included current House Speaker Nancy Pelosi (D-Calif.), was given a virtual tour of the CIA’s overseas detention sites and the harsh techniques interrogators had devised to try to make their prisoners talk.

Among the techniques described, said two officials present, was waterboarding, a practice that years later would be condemned as torture by Democrats and some Republicans on Capitol Hill. But on that day, no objections were raised. Instead, at least two lawmakers in the room asked the CIA to push harder, two U.S. officials said.

“The briefer was specifically asked if the methods were tough enough,” said a U.S. official who witnessed the exchange.

Congressional leaders from both parties would later seize on waterboarding as a symbol of the worst excesses of the Bush administration’s counterterrorism effort. The CIA last week admitted that videotape of an interrogation of one of the waterboarded detainees was destroyed in 2005 against the advice of Justice Department and White House officials, provoking allegations that its actions were illegal and the destruction was a coverup.

Yet long before “waterboarding” entered the public discourse, the CIA gave key legislative overseers about 30 private briefings, some of which included descriptions of that technique and other harsh interrogation methods, according to interviews with multiple U.S. officials with firsthand knowledge.

With one known exception, no formal objections were raised by the lawmakers briefed about the harsh methods during the two years in which waterboarding was employed, from 2002 to 2003, said Democrats and Republicans with direct knowledge of the matter. The lawmakers who held oversight roles during the period included Pelosi and Rep. Jane Harman (D-Calif.) and Sens. Bob Graham (D-Fla.) and John D. Rockefeller IV (D-W.Va.), as well as Rep. Porter J. Goss (R-Fla.) and Sen. Pat Roberts (R-Kan).

Individual lawmakers’ recollections of the early briefings varied dramatically, but officials present during the meetings described the reaction as mostly quiet acquiescence, if not outright support. “Among those being briefed, there was a pretty full understanding of what the CIA was doing,” said Goss, who chaired the House intelligence committee from 1997 to 2004 and then served as CIA director from 2004 to 2006. “And the reaction in the room was not just approval, but encouragement.”

One of the anonymous officials quoted in the piece gave a possible explanation as to why no obejections were raised:

“In fairness, the environment was different then because we were closer to Sept. 11 and people were still in a panic,” said one U.S. official present during the early briefings. “But there was no objecting, no hand-wringing. The attitude was, ‘We don’t care what you do to those guys as long as you get the information you need to protect the American people.’ ”

And obviously since 2002 Congressional Democrats have gotten a lot more complacent about terrorism. Hey, why worry? We haven’t had a terrorist attack since 2001 on our soil … it’s Bush’s fault! Er, or something like that. Yeah, I’m digressing.

The Post goes on to report that it wasn’t until ‘leaks’ to the press about waterboarding in 2005 (two years after the practice stopped being used, by the way) that people (Democrats) start questioning its legality:

Only after information about the practice began to leak in news accounts in 2005 — by which time the CIA had already abandoned waterboarding — did doubts about its legality among individual lawmakers evolve into more widespread dissent. The opposition reached a boiling point this past October, when Democratic lawmakers condemned the practice during Michael B. Mukasey’s confirmation hearings for attorney general.

Harman, who replaced Pelosi as the committee’s top Democrat in January 2003, disclosed Friday that she filed a classified letter to the CIA in February of that year as an official protest about the interrogation program. Harman said she had been prevented from publicly discussing the letter or the CIA’s program because of strict rules of secrecy.

“When you serve on intelligence committee you sign a second oath — one of secrecy,” she said. “I was briefed, but the information was closely held to just the Gang of Four. I was not free to disclose anything.” Roberts declined to comment on his participation in the briefings. Rockefeller also declined to talk about the briefings, but the West Virginia Democrat’s public statements show him leading the push in 2005 for expanded congressional oversight and an investigation of CIA interrogation practices. “I proposed without success, both in committee and on the Senate floor, that the committee undertake an investigation of the CIA’s detention and interrogation activities,” Rockefeller said in a statement Friday.

Does any of this sound familiar? It should.

Far left bloggers are outraged – because this means that those they trust to put a stop to the evil Bush regime’s practice of ‘torturing innocent brown people’ fell down on the job. One ‘progressive’ blogger even went so far as to call Rep. Jane Harman the derogatory “c” word: 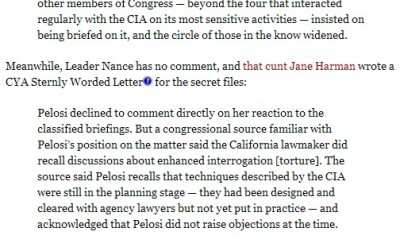 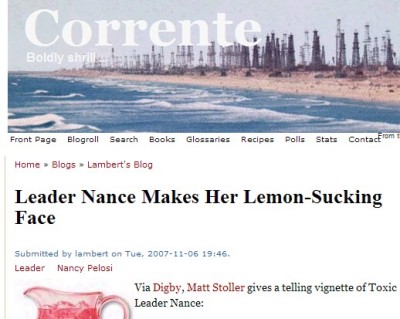 Gosh, and I thought it was only conservative Republicans who picked on Democratic women solely on the basis of their gender …

This blogger, by the way, has been linked to today approvingly by the left’s favorite sock puppet Glenn Greenwald which, I think, means that per Greenwaldian standards that he 100% approves of everything that blogger says and does.

I know – I’m digressing again. The left just makes it too easy sometimes.

So here we have yet another instance of Democrats making political hay about something they knew about long before it ever got leaked to the press. Jules Crittenden quips that we should go easy on the Dems, all things considered:

Not fair! The Dems have a political operation to run, and if they are going to govern by poll, it really isn’t sporting for people to start poking around in what they did or didn’t do, think and say when the polls were blowing in a different direction! Next thing you know, someone’s going to say the Clinton co-presidency thought Saddam had a nuclear program and backed regime change.

The Captain, as always, gets to the heart of the matter:

That doesn’t settle the question as to whether waterboarding constitutes torture, but it certainly calls into question the notion that politics has nothing to do with the debate. The CIA stopped using waterboarding after 2003, and apparently have only used it on three detainees: Khalid Sheikh Mohammed, Abu Zubaydah, and an unidentified al-Qaeda prisoner. Only well after the practice had been abandoned did Congress raise objections to its use, and then never acknowledging their own acquiescence to it earlier. That lack of honesty allowed them to paint themselves as shocked, shocked! that waterboarding had been used as an interrogation technique.

Given that the CIA ended the practice at about the time that one member of Congress in 30 briefings complained about it, I’d call this a wash in terms of responsibility. The reason the CIA briefs the selected few on highly classified covert matters is not to get a rubber stamp on their activities, but to allow oversight and get approval for their covert activities. If Congress couldn’t find it objectionable when waterboarding was employed, they have little to complain about years afterward.

12 Responses to "Democrats on waterboarding, then versus now"