January 21, 2008 — Bill Clinton showed yesterday why he made it into the book “The Art of Napping.”

During an appearance at the Convent Avenue Baptist Church in Harlem, the former president was caught nodding off.

Clinton was there during a service to honor Dr. Martin Luther King Jr., while his wife was nearby at Abyssinian Baptist Church, where she was endorsed by its minister, Rev. Calvin Butts.

Clinton has had napping episodes before. Among others, he nodded off at a Mets game and at Ronald Reagan’s funeral.

When he was president, he told Dan Rather, “If I can take a nap, even 15 or 20 minutes in the middle of the day, it is really invigorating to me. On the days when I’m a little short of sleep, I try to work it out so that I can sneak off and just lie down for 15 minutes, a half an hour, and it really makes all the difference in the world.”

I’ll say. It means 15 minutes of peace and quiet where America doesn’t have to hear him whining about how “unfair” the caucus process is. Now if we could only get his wife to follow suit.

You can watch the video here. If that doesn’t work, go to the article page and the link to the vid is there.

Here’s a screencap (via Drudge): 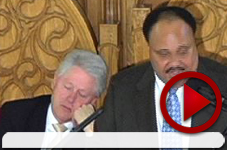 With former President Bill Clinton standing not 20 feet in front of her, Atlanta mayor Shirley Franklin took what appeared to be a political shot at the former president’s comments about Barack Obama’s candidacy.

Speaking at the 40th annual MLK commemorative service at Ebenezer Baptist Church, Franklin said the country is on the “cusp of turning the impossible into reality. Yes this is reality, not fantasy or fairy tales.”

Clinton, in supporting his wife Hillary’s bid for the Democratic nomination, recently took heat for using the term “fairy tale” to describe Obama’s depiction of his stance on the war.

Franklin has endorsed Obama, who spoke from the same pulpit at Ebenezer on Sunday.

Today, after Franklin’s remarks, the crowd of more than 2000 rose to its feet – except for Bill Clinton, who sat in his front pew seat and clapped politely.

During his address, Clinton responded to Franklin’s remarks. “Mayor Franklin already took care of the political stuff. I wouldn’t have said it quite the way she did but she got it all out there.”

And the hits just keep on comin’: The highest ranking black man in Congress, House Majority Whip James Clyburn, who admitted last August that a positive report on Iraq from General Petraeus would be ‘bad news’ for anti-war Democrats, is warning Bubba and Co to “chill” on criticizing Barack Obama:

(CNN) — The bitter back-and-forth between former President Bill Clinton and Sen. Barack Obama has led a prominent black lawmaker to tell the former president Monday to “chill a little bit.”

As their campaign sparring continues, the Illinois senator seems to be spending almost as much time responding to Hillary Clinton’s husband as he does to the candidate herself.

House Majority Whip Jim Clyburn, one of the most powerful African-Americans in Congress, weighed in on the feud Monday, saying it was time for Bill Clinton to watch his words.

Bill Clinton’s attacks on Obama, Clyburn said in a CNN interview, were unfair because a former president’s viewpoint “carries with it extra weight.”

“I think they would say in ‘Gullah Geechee’ country he needs to chill a little bit. I hope he understands what that means,” Clyburn told CNN.

“I can understand him wanting to defend his wife’s honor and his own record, and that is to be expected. But you can’t do that in a way that won’t engender the kind of feelings that seem to be bubbling up as a result of this.”

“He is revered in many sections of the African- American community, and I think he can afford to tone it down,” Clyburn added.

This is just a few days after other top Democrats angrily told Clinton to stop going after Obama, and and a week and a half after Clyburn revealed to the NYTimes how he felt “offended” by Hillary and Bill Clinton’s alleged attempts at “diminishing the role” of black civil rights activists like MLK while criticizing Barack Obama.

Whether Bill Clinton’s attacks on Barack Obama are fair or unfair, you have to marvel at the audacity of these Dem “leaders” who are advising Bubba to cool it, because what they’re sound like they’re saying is that Barack Obama should be shielded from most criticisms unless they are of the mild, easily debunked variety. And although Barack Obama himself is finally responding to the attacks, it probably wouldn’t hurt for him to tell these “leaders” to back off and let him handle the criticisms of his record, because he doesn’t need any proxies fighting his battles for him.

Another interesting aspect of this is where were all the black leaders when Republican and then Lt. Gov. of Maryland Michael Steele was getting trashed while running for the US Senate back in 2006? Oh yeah, they were defending the type of gutter tactics that would make Bill Clinton’s “attacks” on Barack Obama seem like child’s play.

Tonight, Hillary, Obama, and Edwards will square off in SC for the last Dem debate before this weekend’s primary there. It starts at 8 pm ET and will be broadcast on CNN. Polls for SC show that Obama should win the state handily.