I touched a little on Kennedy’s endorsement of the O-man earlier as well as noted that it was becoming a two-man race in Florida, but wanted to expand on it more in this post.

First, no matter what you think of their politics, the three Kennedys (Sen. Ted, Rep. Patrick, and JFK’s daughter Caroline) standing on stage endorsing Barack Obama symbolized something close to a passing of the torch between “the old guard” and the future (?) possibly of the Democratic party: 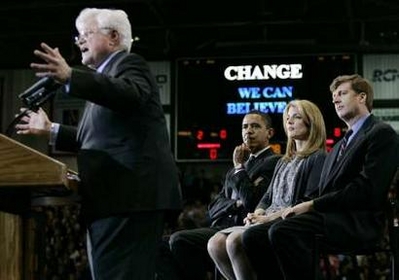 By the “old guard” I mean an old style of playing the political game – which includes getting down and dirty to smear your opponent in order to win an election as well as your battles in Congress, versus Obama’s style, which is to sugar coat his uber-liberalism with fancy words and vague promises of “change” and “hope” and “unity.” There were a couple of good posts up at National Review’s The Corner blog which addressed both the oddness of Ted Kennedy downing the “politics of personal destruction” as well as Barack Obama’s lofty, pretty rhetoric that masks his uber-liberalism. First up, Peter Wehner on Ted Kennedy:

These are very nice sentiments by Senator Kennedy. I, too, hope we move beyond the “politics of fear and personal destruction” which the Clintons have done so much to advance. But there is that small matter of Senator Kennedy’s own history — and in particular, his attack on Judge Robert Bork in 1987. Senator Kennedy, you’ll recall, said this about Judge Bork after Bork was nominated by President Reagan to serve on the Supreme Court:

“Robert Bork’s America is a land in which women would be forced into back-alley abortions, blacks would sit at segregated lunch counters, rogue police could break down citizens’ doors in midnight raids, children could not be taught about evolution, writers and artists would be censored at the whim of government, and the doors of the federal courts would be shut on the fingers of millions of citizens for whom the judiciary is often the only protector of the individual rights that are the heart of our democracy.”

This was a vicious smear and a landmark moment in modern American politics. If the Left is interested in tracing the etiology of the “politics of fear and personal destruction” they might begin by focusing on the remarks by Senator Kennedy. It changed politics in this country in a terrible and durable way. And it was not an isolated moment. Senator Kennedy has spoken some of the most divisive and vitriolic words that have emerged from the upper chamber of Congress. It was Kennedy, for example, who charged that the war in Iraq was a “political plot hatched in Texas” and has accused President Bush of telling “lie after lie after lie after lie” â€“ charges that were false, reckless, and inflammatory.

Doesn’t really sound like Il Bloviatore (props for that term go to ST reader Leslie) from Massachusetts is a genuine agent of change, does it?

Next up, John Derbyshire on Barack Obama’s liberalism. Too good to snip bits of it and paste here, so click the link to read what he wrote in full.

NOW New York State is declaring that Senator Kennedy “betrayed” women everywhere with his endorsement of the male candidate. Funny thing is, they made this declaration right in the middle of skewering him for the many other things he supposedly hasn’t done “for women” – yet they’ve stood by him anyway?! Endorsing the male hierarchy, apparently, is the mother of all sins. Via Ben Smith at The Politico (emphasis added):

“Women have just experienced the ultimate betrayal. Senator Kennedy’s endorsement of Hillary Clinton’s opponent in the Democratic presidential primary campaign has really hit women hard. Women have forgiven Kennedy, stuck up for him, stood by him, hushed the fact that he was late in his support of Title IX, the ERA, the Family Leave and Medical Act to name a few. Women have buried their anger that his support for the compromises in No Child Left Behind and the Medicare bogus drug benefit brought us the passage of these flawed bills. We have thanked him for his ardent support of many civil rights bills, BUT women are always waiting in the wings.

“And now the greatest betrayal! We are repaid with his abandonment! He’s picked the new guy over us. He’s joined the list of progressive white men who can’t or won’t handle the prospect of a woman president who is Hillary Clinton (they will of course say they support a woman president, just not “this” one). â€˜They’ are Howard Dean and Jim Dean (Yup! That’s Howard’s brother) who run DFA (that’s the group and list from the Dean campaign that we women helped start and grow). They are Alternet, Progressive Democrats of America, democrats.com, Kucinich lovers and all the other groups that take women’s money, say they’ll do feminist and women’s rights issues one of these days, and conveniently forget to mention women and children when they talk about poverty or human needs or America’s future or whatever.

“This latest move by Kennedy, is so telling about the status of and respect for women’s rights, women’s voices, women’s equality, women’s authority and our ability â€“ indeed, our obligation – to promote and earn and deserve and elect, unabashedly, a President that is the first woman after centuries of men who â€˜know what’s best for us.'”

These clueless wonders (conveniently) left out his first “betrayal” of women.

Not that Senator Kennedy cares one way or the other what they think. NOW-NY have proven with what they wrote about his endorsement of Obama that they’ll continue to support him even though he’s disappointed them more times than they can count on “women’s issues.” These women are just as big a sell-out as the national NOW, after their continued, unwavering support of Bubba even though he was a notorious womanizer who cheated on his wife by doing, among other things, converting the Oval Office into a pick-up joint to suit his ‘personal needs.’ Then-Time magazine White House correspondent Nina Burleigh alluded to why the support continued with this infamous declaration back in 1998:

Burleigh told the Washington Post: “I’d be happy to give him [oral sex] just to thank him for keeping abortion legal.” Describing what she perceived as the president’s flirting with her aboard Air Force One during a game of Hearts, she wrote in Mirabella: “If he had asked me to continue the game of Hearts back in his room at the Jasper Holiday Inn, I would have been happy to go there and see what happened.”

In the middle of all the hoopla and fanfare surrounding the Kennedys’ announcement of their support for Obama, came the news that the junior Senator from Illinois, who is trailing Clinton by double digits in CA, is trying to win California’s Hispanic vote going into next Tuesday by ….

… touting his support for driver’s licenses for illegals:

Sen. Barack Obama easily won the African American vote in South Carolina, but to woo California Latinos, where he is running 3-to-1 behind rival Sen. Hillary Rodham Clinton, he is taking a giant risk: spotlighting his support for the red-hot issue of granting driver’s licenses to illegal immigrants.

It’s a huge issue for Latinos, who want them. It’s also a huge issue for the general electorate, which most vehemently does not. Obama’s stand could come back to haunt him not only in a general election, but with other voters in California, where driver’s licenses for illegal immigrants helped undo former Gov. Gray Davis.

Clinton stumbled into that minefield in a debate last fall and quickly backed off. First she suggested a New York proposal for driver’s licenses for illegal immigrants might be reasonable. Then she denied endorsing the idea, and later came out against them.

“Barack Obama has not backed down” on driver’s licenses for undocumented people, said Federico PeÃ±a, a former Clinton administration Cabinet member and Denver mayor now supporting Obama. “I think when the Latino community hears Barack’s position on such an important and controversial issue, they’ll understand that his heart and his intellect is with Latino community.”

McQ explains why this is risky for the O-man:

The electorate has made it clear that it does not support this sort of a program despite the arguments politicians have put out claiming it is a ‘public safety’ issue. They’ve also demonstrated, at least in California, that they’ll punish any politician who continues to push this sort of an agenda.

I’m not sure what percentage of the Latino vote this may bring Obama (1 in 3 CA voters is Latino), but I would guess it won’t be as much as he stands to lose among other California voters. And while the Clinton campaign would have to approach the subject carefully in order to use it, given the Hillary’s “Spitzer” moment on one of the debates, they will find a way to use it.

Republicans, otoh, will have no qualms whatsoever about using this against Obama should he become the eventual Democratic nominee.

Yep – and he’ll also have to explain why he favors driver’s licenses for illegals yet, as per the last Dem debate, doesn’t favor including them in his healthcare plan. An Obama supporter would argue the “cost” factor, but that would ignore the “cost factor” associated with having millions of illegals on our roads with a valid driver’s license who can’t even read the damn road signs, and the costs associated with making road signs more “user friendly” to illegals, as well as, more importantly, the human cost – in lives.

On the other side of the aisle, in what appears to be a battle between Dumb and Dumber, McCain and Romney are playing the name game, with both declaring the other the GOP presidential race’s bonafide “liberal,” this coming on the heels of McCain’s false assertion that Romney was once in favor of surrendering in Iraq. Sigh. Wake me when it’s over.

Here’s some late-breaking news also related to the GOP primary in Florida and Rudy’s campaign, via the LA Times Top of The Ticket blog:

Rudy Giuliani appears to be pondering an end to his long pursuit of the Republican presidential nomination.

In a meeting in the back of his chartered plane en route to St. Petersburg, Fla., a short while ago, the onetime, longtime GOP front-runner told a small group of reporters, including The Times’ Louise Roug: “The winner of Florida will win the nomination.”

He then went on to predict he would win. And his spokeswoman, Maria Comella, said later he was speaking with confidence.

But that’s an unusually categorical statement suggesting that only a total first-place upset by Giuliani, who trails both Mitt Romney and John McCain in all major polls for Florida’s Republican primary tomorrow, will keep him in the competition, despite previous repeated vows to continue.

Here are the latest poll numbers coming out of Florida.

5 Responses to "Ted Kennedy as an agent of “change”? PLUS: McCain and Romney trade “you’re a liberal” barbs"