He’s about to deliver it in just a few minutes. Here are some highlights of what the Prez. will talk about. Drudge has a full transcript of what the President will say.

You can watch it live online at Fox News.

9:09 – I see Kennedy and Obama are sitting chummily side by side. Hillary appears to be glaring from afar.

9:14 – The Dems don’t like his talk about renewing the Bush tax cuts

9:22 – Looks like Ted Kennedy is falling asleep at another SOTU.

9:28 – Is Nancy Pelosi reading a book while the President is speaking?

Check out how many Dems are standing for preserving innocent human life?

The Dems reactions to the Prez. talking about Iraq are so telling (they always are) about how they feel about winning.

Update 11:12 PM: The AP reports on the chill felt in the air tonight as Clinton and Obama did not speak to each other:

WASHINGTON (AP) – So close, yet so far away—and so bitter.

Rival Democrats Hillary Rodham Clinton and Barack Obama came within a foot of each other just before President Bush’s State of the Union speech Monday night and managed not to acknowledge each other, and certainly not touch.

Clinton, clad in scarlet, crossed the aisle between their seats on the House floor and reached out a hand to greet Sen. Edward M. Kennedy, the Democratic icon whose endorsement she had courted only to lose it to Obama.

Kennedy shook her hand while Obama, wearing a dark suit and standing between the two, turned away.

The rivals then retreated to their seats, only the aisle and four senators between them.

This photo says it all: 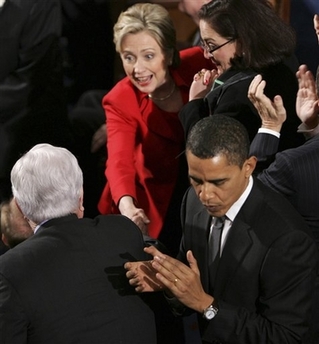 13 Responses to "The President’s last SOTU (MINI-LIVEBLOGGING – UPDATE: CHILL IN THE AIR BETWEEN HILLARY AND OBAMA)"