As the primary season lingers on, and the delegate count between Hillary Clinton and Barack Obama so close, the question that keeps bubbling up into the minds of (mainly) Hillary supporters is: how can we legally seat the Florida and Michigan delegates, or can we have a re-vote in Florida and Michigan? Via Marc Ambinder, we have DNC Chair Howie Dean’s response:

Howard Dean will not bend the party rules to grandfather in the disputed delegates from Michigan and Florida, the Democratic party chairman said in a statement today.

Instead, he put the state parties on notice: either they can wait and allow the credentials committee to decide whether to seat their delegates, or submit to a re-vote sanctioned under DNC rules. “We look forward to receiving their proposals should they decide to submit new delegate selection plans and will review those plans at that time,” he said in the statement.

“Everyone seems to be asking what the DNC will do,” a Democrat close to Dean said. “But the question is: what will the state parties do.”

Dean’s statement implies that he has no intention of changing the rules to accommodate any solution proposed by the candidates or the state parties. There has been some suggestion that the two remaining presidential candidates might try to broker a deal among themselves. His line in the sand narrows the options for Hillary Clinton’s campaign because it is unlikely that a credentials committee would endorse a delegation congenial to her mathematical interests.

Dean will make the rounds of the network morning news shows tomorrow to explain his reasoning.

The state parties better act quickly: they have to submit a new plan and run the contest before June 10.

Republicans are understandably hoping to use the fractures in the Dem party to their advantage, hoping that a prolonged fight between Clinton and Obama will mean they’ll spend more money on each other than on McCain. TalkLeft thinks Barack Obama is only “lukewarm” to the idea of having a re-vote in Florida, while Kevin Drum tells his fellow liberals to “chill out.”

And in case you missed it … W officially endorsed McCain today.

But the big question in the back of everyone’s mind today was ….

Who does Cindy McCain’s hair and make-up? She always looks so classy. 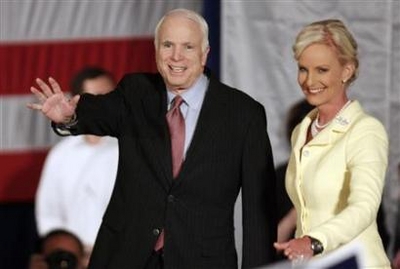 8 Responses to "Bowling for delegates"