5/4/08 Update: See a much better video of the fainting incident here.

———
So like while I was at tonight’s “Get Out The Vote Rally” featuring BO, at roughly 6:55, about 30 minutes into his speech, guess what happens? Someone faints. I hadn’t heard about this happening in a while, at least not since there had been quite a bit of discussion in the blogosphere a couple months ago about all the fainting episodes, and how they all seemed so strangely similar. Well, add another one to the list.

I can’t believe I actually got this! It’s so short (three seconds) because I’m still getting used to all the bells and whistles on this camera, and did not have it set on the video setting when I first heard BO call for an EMT but when he did, I quickly turned it to video and hit the start button, but I hit it again about three seconds later because I wasn’t sure I had started it – but now I know that meant I switched it off. Look closely, and you’ll see at the 2 second mark, people fanning someone in the crowd (watch the guy in the red hat and shirt kneeling over, and note the people turned around in the front looking, a couple of people look like they are fanning someone). It happened about 4 or 5 rows from the front of the crowd, and right in the center in a spot that was close and very visible for BO. I took the video right after Obama had just gotten done calling for a medic and saying the usual stuff he does when someone faints at one of his rallies.

It’s my first video ever uploaded to YouTube, so please don’t laugh

. Just wished I’d have known what I was doing and had kept the vid going a few seconds longer. I was honestly shocked when I started uploading everything tonight and saw the video pop up on the screen.

Here’s a photo of the where the drama was taking place – I think the guy in the white T-shirt who is looking down at the fainter had his hand up to signal for help. 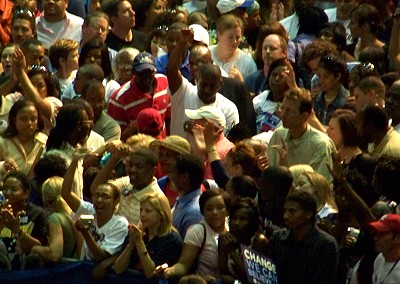 Not bad for someone who was sitting in the upper level close to the back, even if I do say so myself!

I’m happy to report that I managed to make it through the entire rally without feeling lightheaded or faint.

Still sorting out photos and composing the recap. Stay tuned for that a little later this evening.