As said by Hillary Clinton regarding another reason why she believes she should stay in the race (emphasis added):

“My husband did not wrap up the nomination in 1992 until he won the California primary somewhere in the middle of June, right? We all remember Bobby Kennedy was assassinated in June in California. I don’t understand it,” she said, dismissing calls to drop out.

In other words, she should stay in the race, in part, because, like, something bad might happen to Obama, and then who would the Dem nominee be if she had conceded the race?

The lame and inevitable expression of regret came a few hours later:

“I was discussing the Democratic primary history and in the course of that discussion mentioned the campaigns of both my husband and Senator (Robert) Kennedy waged in California in June in 1992 and 1968 and I was referencing those to make the point that we have had nomination primary contests that go into June. That’s a historic fact,” she said.

“The Kennedys have been much on my mind the last days because of Senator Kennedy,” she added, referring to Sen. Edward M. Kennedy’s recent diagnosis of a brain tumor. “I regret that if my referencing that moment of trauma for our entire nation and in particular the Kennedy family was in any way offensive. I certainly had no intention of that whatsoever.

“My view is that we have to look to the past to our leaders who have inspired us, give us a lot to live up to, and I’m honored to hold Senator Kennedy’s seat in the United States Senate from the state of New York and have the highest regard for the Kennedy family,” she said.

So she’s blaming her gaffe on the unfortunate news about Ted Kennedy’s malignant brain tumor. She was just distracted and distraught (and tired?). Uh huh. If that wasn’t one of the worst explanations for something stupid said in American political history, I don’t know what is.

Hey, maybe she was trying to float the argument out there to see if people would buy into it before she presented it to the superdelegates. 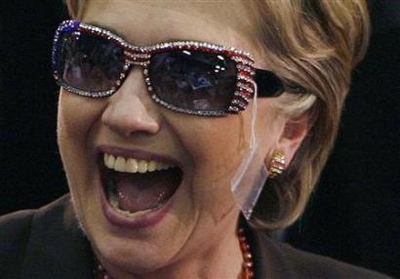 Not a very bright move, Senator.