CSPAN‘s broadcasting it live both on TV and on their website. Looks like the DNC elites are behind this morning as no one is seated at this point and it’s 9:30. Perhaps they are a little behind because their dinner engagement went on until 2 this morning. Most of the CSPAN callers this morning are pro-Obama. One “Independent” caller suggested that Democrats should just take Bush and Cheney out of the office, skip impeachment, and make Al Gore president and Obama VP.

The protestors are out in full force: 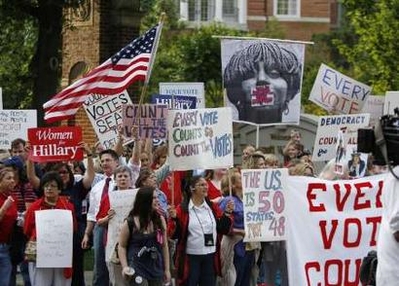 9:45 AM: Looks like the meeting is about to get underway. It’s being held at the Marriott Wardman Park Hotel in DC.

9:50 AM: They’re saying the Pledge of Allegiance.

10:00 AM: DNC Chair Howie Dean is giving his speech, saying this is not about the candidates but our country, recalls his campaign and how he was mad at the party, how Al Gore told Dean during a moment of Dean frustration that it wasn’t about him, and how Gore had had the presidency was snatched from him by 5 “intellectually bankrupt” Supreme Court justices.

10:17 AM: Florida’s flawed process is being blamed by one of the DNC Co-Chairs on the GOP Gov. and legislature. Typical.

10:25 AM: The Florida arguments are now being heard. First up is the rep. for the FL Democratic party. The BO and HRC campaigns will make their arguments shortly after the initial challenge is layed out.

10:48 AM: The first argument is over. Now the party elites on the committee are asking questions about the challenge.

11:00 AM: Senator Bill Nelson (D-FL) is up next to speak. He supports Hillary. Nelson brings up 2000 election and how FL voters “felt disenfranchised.” Believes the Florida votes should count and that the delegates should be seated based on DNC rules (50% penalty?).

11:17 AM: Nelson and David McDonald (a committee member) are arguing about whether or not Democrats in the FL legislature and official FL party members were responsible at all for the situation they are in now.

11:22 AM: A black female FL state senator is speaking on behalf of the Clinton campaign.

Lunchtime for me. Back in about 45 minutes.

12:11 PM: Rep. Robert Wexler (D-FL) has announced that the BO campaign supports the Ausman petition. Ausman was the first person to argue on behalf of seating the Florida delegates at 50%. Verrrry interesting. Wexler has also requested the full power of the Florida superdels be restored. Wexler is very passionate about his case. Says Obama is making concessions for the sake of party unity.

12:20 PM: The HuffPo is reporting that high level sources are saying that the DNC reached an agreement last night on FL and MI (via Memeo):

Two sources, including a high-ranking official with the Florida delegation, have confirmed that the DNC Rules and Bylaws Committee (RBC) reached an agreement last night and will seat the state’s entire delegation but give each delegate half a vote. The result would be a net gain of 19 delegates for Sen. Hillary Clinton, though there is no word yet on how the superdelegates from the state will be allocated. It is, the official says, a compromise that Sen. Barack Obama will be willing to make. “There will be theater but not much fight.”

Moreover, the impasse over what to do about Michigan’s delegation may be approaching resolution.

Sources with knowledge of the RBC’s inner dealings say a compromise is being crafted in which all of the candidates who took their names off of the state’s ballot would voluntarily agree that the now-uncommitted delegates would go to Obama, after which the state’s entire delegation would be seated.

The proposal, which two sources confirm has been discussed, would stand the greatest chance of passing: it would pacify Michigan Sen. Carl Levin, who has demanded that his state’s non-sanctioned January primary be fully honored; and it would circumvent the Clinton campaign’s insistence that party rules prevent simply assigning all of Michigan’s uncommitted delegates to Obama.

In addition to Obama, Sen. Joseph Biden, former Sen. John Edwards and Gov. Bill Richardson all removed their names from the Michigan ballot. The Clinton campaign has contended that it would be against party rules to simply determine that all “uncommitted” voters were backing Obama. The floated compromise would resolve that dispute.

Tad Devine, a veteran Democratic strategist who helped craft the delegate selection rules, says that such a compromise would be “based on the broad grant of authority under the charter of the [Rules and Bylaws Committee].” In other words, he said, the deal would rest on the agreement of all the relevant campaigns and Democratic leaders, not any specific party rules.

If completed, the compromise would net Clinton ten delegates — 69 for her and 59 for Obama. It remains unclear how the superdelegates from the state would be allocated.

If both the Florida and Michigan deals are reached, the Clinton campaign would receive a net gain of 29 delegates — far short of what the New York Democrat was hoping to pick up from the Saturday meeting.

The Michigan arguments are up next.

12:39 PM: Mark Brewer (MI) is arguing that the delegates should be allocated 69-59 Clinton-Obama. If you’re having trouble viewing the proceedings at CSPAN, you can watch them here:

12:55 PM: Clinton supporter Harold Ickes is clarifying that those who took their names off the ballot in MI did so voluntarily, that it was not a rule or required for them to do so.

Marc Ambinder has some interesting info on an upcoming speaker for MI – Sen. Carl Levin:

The big unknown tomorrow is a man whose primary interest has nothing to do with the electoral success of Barack Obama or Hillary Clinton. Sen. Carl Levin will be speaking on behalf of Michigan; he wants the entire delegation seated and given full votes, and if he does not get his way, he will likely challenge the RBC’s ruling when the credentials committee convenes unless the rules and bylaws committee promises to strip Iowa and New Hampshire of their privileged status in 2012.

What that means is that the debate about the size of Michigan’s delegation will not be settled tomorrow. [today – ST]

What we don’t know is whether Hillary Clinton will use Sen. Levin’s ornery desire to punish Iowa and Michigan [actually NH, not MI -ST] as a pretext for continuing her campaign.

The blogosphere is buzzing with conspiracy theories that Harold Ickes and Tina Flournoy have set a trap for Obama: because the RBC won’t given them everything they want, they’ll have an excuse to prolong the drama. (That rhymed!)

1:02 PM: Sen. Carl Levin is getting ready to speak. He is an uncommitted superdelegate.

1:10 PM: He is indeed making the argument about Iowa and NH always going first and how he believes it’s not right. I gotta say he’s making a pretty compelling argument.

1:44 PM: Levin’s speech is over. David Bonior is now speaking on behalf of the Obama campaign.

1:49 PM: The arguing outside continues as well: 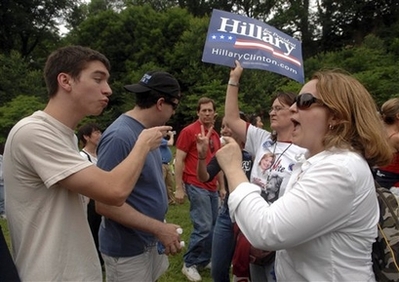 Caption: Matthew NcNey of Laurel, Md., left, a supporter of Sen. Barack Obama, D-Ill., argues with Jennifer Zambernard of Silver Spring, Md., a supporter of Sen. Hillary Rodham Clinton, D-N.Y., during a Count Every Vote ’08 rally near the site the DNC Rules and Bylaws Committee hearing on Saturday, May 31, 2008, in Washington. (AP Photo/Kevin Wolf)

2:23 PM: Former Gov. of MI Jim Blanchard is arguing on behalf of the Clinton campaign that the delegates be seated 73-55.

2:47 PM: Certain committee members are now objecting over the use of the word “disenfranchisement” (Gov. Blanchard used it) in comparison to what they allege happened in 2000 (“stolen” election). They didn’t object to it earlier when the arguments were being made in favor of Obama.

Donna Brazile is now arguing that trying to change the process now equates to “cheating.” Getting loud applause from the (pro-Obama) crowd.

4:05 PM: Fox is reporting that Florida is all but settled, but that Michigan will take more time to settle because of the fact that Obama was not on the ballot there.

4:15 PM: The meeting is about to reconvene. TNR’s Eve Fairbanks reports on what she’s seen today at the pro-Hillary protests taking place a couple of blocks from the Marriott.

4:25 PM: It still hasn’t reconvened. Check out this report from Jake Tapper on the tensions on display both inside and outside the meeting. More on that here.

4:50 PM: The room is starting to fill up again but most of the committee members still haven’t returned.

5:04 PM: Still waiting for the meeting to reconvene. In the meantime, congrats to the Space Shuttle Discovery for a successful lift off.

I anticipate we’ll have “lift off” soon when the DNC elites get back together to decide the fates of the FL and MI delegates.

5:28 PM: CNN is reporting that the committee is meeting behind closed doors, possibly deciding on what proposals they will be debating and deciding in the public meeting.

5:43 PM: They’re still not back. Obviously they’re trying to hash this out behind closed doors. CNN speculates that’s because they don’t want to give the RNC any more “disenfranchisement” ammunition. Wonder how happy or unhappy Clinton supporters are that this may be decided behind the scenes rather than openly and publicy?

6:01 PM: The committee members are starting to file back in and take their seats.

The meeting is about to start.

CNN reporting that a single source is saying that the committee has reached a deal on both FL and MI.

6:35 PM: The proposal by Alice Huffman to seat all delegates with full voting power in FL failed. Chanting erupted from the crowd but I couldn’t tell what they were saying.

6:44 PM: Huffman just confronted a protestor who was saying that the DNC were taking their votes away. A motion is on the floor to consider seating all of Florida’s delegates, giving them a half vote each. 27 of the 30 members voted in favor. Florida has now been resolved.

Michigan’s up next. The 69-59 proposal is up for discussion and vote.

Don Fowler, also a Hillary supporter, said it’s not his ideal solution, but he’s ok for it. Harold Ickes is against the proposal, saying it’s not fair to Clinton because it takes 4 delegates away from Clinton. He’s really upset.

6:55 PM: Sounds like the crowd is more pro-Clinton than Obama. Ickes just said Hillary Clinton has asked him to say that she is reserving her right to take this to the credentials committee at the convention.

7:00 PM: Will be interesting to see how this MI vote plays out. I sense a divided committee.

Everett Ward (from NC) is going off on Ickes for what he says is Ickes political posturing.

7:30 PM: The Clinton campaign has just put out a memo reaffirming what Ickes said about Hillary reserving her right to take this to the credentials committee at the convention.