I’m just getting caught up on the news of the day, and by far the most intriguing thing I’ve seen is a post from the HuffPo suggesting that Hillary will be exiting stage left either tomorrow night or a day or two after that, suspending her campaign and endorsing Barry O. Thomas B. Edsall writes:

Hillary Clinton has summoned top donors and backers to attend her New York speech tomorrow night in an unusual move that is being widely interpreted to mean she plans to suspend her campaign and endorse Barack Obama – if not that night, within a day or two.

Obama and Clinton spoke Sunday night and agreed that their staffs should begin negotiations over post-primary activities, according to reliable sources. In addition to seeking Obama’s help in raising money to pay off some $20 million-plus in debts, Clinton is known to want Obama to assist black officials who endorsed her and who are now taking constituent heat, including, in some cases, primary challenges from pro-Obama politicians.

“This has never happened before,” one donor said, referring to the personalized request by email to attend the event in New York Tuesday night.

Earlier in the day it was reported that Clinton staffers were being urged by the campaign’s finance department “to turn in their outstanding expense receipts by the end of the week,” another sign that the run at the White House was nearing an end. In addition, Politico wrote that members of Clinton’s advance staff had received calls and emails Sunday night, summoning them to New York City and telling them their roles on the campaign are ending.

The latest news, per senior Clinton aides, she will not be giving a concession speech tomorrow night, in spite of the speculation she is – especially after her husband said at a campaign stop today in SD, “This may be the last day I’m ever involved in a campaign of this kind.” Video below:

Reading between the lines of all this, it does appear that the handwriting is on the wall, although all these anonymously sourced stories could just be a way of throwing people off so Hillary can drop a bombshell later this week by announcing she’s taking it to the convention. Who knows?

But for kicks, let’s say she’s cut a deal with Obama to step aside once he finally reaches the new magic number (2,118) to clinch the nomination. What might’ve been on her list of demands?

1. VP slot: Possible, as it’s not unheard of for presidential nominees to pick running mates who aren’t exactly their cup o’ tea, in an effort to “help the ticket.” However, Obama would have to do a lot of backtracking after repeatedly and successfully painting her as part of the “politics of the past,” a “Washington insider,” the type of person he claims has ruined Washington, DC. I don’t see this happening, but then again, my track record on political predictions is not even close to 50% accuracy, so take that for what it’s worth.

2. Settle her campaign debt: La Clintonista is some $20 mil in the red, after loaning her campaign millions over the course of the last several months in an effort to keep up with Obama’s fundraising machine. A few weeks ago, the NYT Caucus blog reported that Obama said he would not rule out helping her “retire” her campaign debt, so this has a strong possibility of being part of any deal that may have been made.

3. Cabinet position/nationalized healthcare plan agreement: If what the UK Telegraph reported over the weekend is accurate, we could see a Health and Human Services Secretary Hillary Clinton in an Obama adminstration:

The former First Lady would get the chance to pilot Mr Obama’s reforms of the American healthcare system if she agrees to clear the path to his nomination as Democratic presidential candidate.

Senior figures in the Obama camp have told Democrat colleagues that the offer to Mrs Clinton of a cabinet post as health secretary or to steer new legislation through the Senate will be a central element of their peace overtures to the New York senator.

The Obama camp, however, remains nervous about Mrs Clinton’s intentions and ambitions, and is preparing a face-saving package that will allow her to continue to play a role in health care reform, which has been her signature issue for more than a decade. Despite pressure from some Clinton allies, Mr Obama and his advisers do not wish to ask her to be his vice-presidential running mate. “They will talk to her” one Democrat strategist close to senior figures in the Obama camp told The Sunday Telegraph. “They will give her the respect she deserves. She will get something to do with health care, a cabinet post or the chance to lead the legislation through the Senate.”

Another Democrat who has discussed strategy with friends in the Obama inner circle said that Mr Obama was openly considering asking Mrs Clinton to join his cabinet, alongside two other former presidential rivals: John Edwards, who is seen as a likely attorney general; and Joe Biden, who is a leading contender to become Secretary of State.

Eeeek! So glad I didn’t get a chance to post that last one first thing morning as it would have spoiled everyone’s Monday right off the bat. How about just settling her campaign debt, Mr. Obama – don’t get carried away, now! Ick. Can you imagine such a cabinet!?! That trio would have many Republicans reaching for the liquor cabinet …

Anyway, all this has made political junkies like me actually eager to watch a Hillary speech. She, unlike her opponent, is not known for her eloquence, but some of the best speeches I’ve ever heard from politicians happen to be their swan songs, so maybe she’ll surprise us all – assuming the rumors that she’s getting ready to suspend her campaign are true. 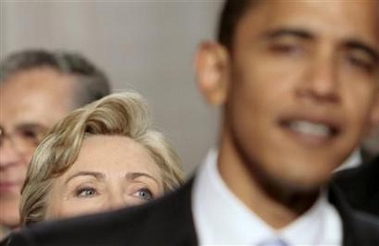