Lynn Sweet has posted some good pix she took of what things look like so far at the Pepsi Center, home to the 2008 Democratic National Convention. One in particular struck my eye: 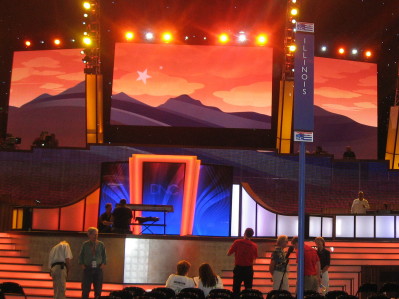 That sounds about right.

I’m not even sure if Obama will be appearing at the DNC, considering he’ll be making his acceptance speech at Invesco Field, but even if he won’t be in attendance at the Pepsi Center (where anti-war protesters are already on the march), judging by the background in that picture I have no doubt he’ll be with the conventioneers in “spirit.” (groan)

As for the captions, I now turn that over to you. Take it away, ya’ll!

Cross-posted to Right Wing News, where I am helping guestblog for John Hawkins on Sundays.