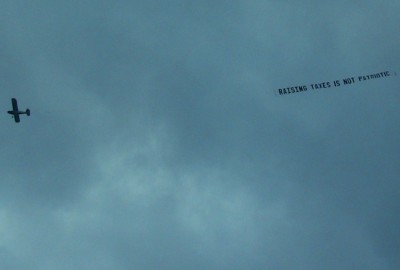 Fox News has the story:

JACKSONVILLE, FL – Protesters are as common to the campaign trail as supporters – from those waving McCain signs at the entrance of events, to the more subtle passersby who flash the thumbs down gesture (or worse) along the motorcade route, to the occasional group that infiltrates and interrupts an event.

But this afternoon, someone went all out to get his or her message out at Obama’s rally in northern Florida.

A single engine plane pulling a banner behind it – like those you’d see at the shore – circled Obama’s rally, which was held at Metropolitan Park along the St. John’s River in Jacksonville.

The protester’s message: “Raising taxes is not patriotic.”

It’s not known whether or not Obama actually saw the sign.

Here’s the bigger version of the picture, again courtesy of Fox.

Cross-posted to Right Wing News, where I am helping guestblog for John Hawkins on Sundays.