The Washington Examiner reports (via Memeorandum):

“ED staff are invited to join Secretary Arne Duncan, the Reverend Al Sharpton, and other leaders on Saturday, Aug. 28, for the ‘Reclaim the Dream’ rally and march,” began an internal e-mail sent to more than 4,000 employees of the Department of Education on Wednesday.

Sharpton created the event after Glenn Beck announced a massive Tea Party “Restoring Honor” rally at the Lincoln Memorial, where King spoke in 1963.

The Washington Examiner learned of the e-mail from a Department of Education employee who felt uncomfortable with Duncan’s request.

Although the e-mail does not violate the Hatch Act, which forbids federal employees from participating in political campaigns, Education Department workers should feel uneasy, said David Boaz, executive vice president of the libertarian Cato Institute.

“It sends a signal that activity on behalf of one side of a political debate is expected within a department. It’s highly inappropriate … even in the absence of a direct threat,” Boaz said. “If we think of a Bush cabinet official sending an e-mail to civil servants asking them to attend a Glenn Beck rally, there would be a lot of outrage over that.”

Russ Whitehurst, director of the liberal-leaning Brookings Institution’s Brown Center of Education Policy, said nothing like this happened when he was a Department of Education program director from 2001 to 2008: “Only political appointees would have been made aware of such an event and encouraged to attend.”

Had Duncan encouraged 4,000 Department of Education employees to attend Glenn Beck’s rally, he would have been discarded like yesterday’s jobless claims report… unexpectedly, of course.

Yeah, and they would have also been characterized as “raaaacists.”

If any DoE employees actually took Duncan’s advice and went to Sharpton’s rally, how many do you think spotted the flaw on this SEIU banner: 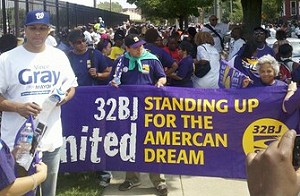 Can’t make this stuff up, folks.

13 Responses to "Ed. Sec. to employees: Maybe you should attend Sharpton rally"