It was predicted that as many as 250 attacks would occur in Iraq on election day. So far, 9 homicide bombings happened, with at least 31 dead. Tragic, yes, but not on the scale we were hearing and thinking would happen. 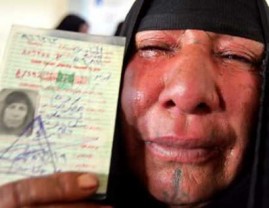 Folks, these photos are overwhelming to me. I’m a little emotional at the moment because I know there has been so much going on there, an escalation in attacks in attempts by the insurgency to shake the will of the coalition and the average everyday Iraqi who just wants to live a normal life. What the Iraqi people did today in Iraq was something they haven’t been able to do for decades and that’s to vote for who THEY want to preside over their country. American lives and lives of our coalition members, as well as Iraqi lives have been lost to bring this type of freedom to Iraq. So next time someone who is against this war tries to tell you that our men and women over there are dying for no reason, please remember this day when the Iraqis tasted democracy and make sure to correct them when they make such a faulty assertion.

The Iraqi people are celebrating and we should be celebrating, too, because, as Mohammed and Omar have said over at Iraq the Model:

The people have won. (Wink: Instapundit, who has a small roundup of what other bloggers are saying and some photos of the election as well ).

More: Carpe Bonum glances around at MSM coverage of the Iraq elections.

Captain Ed takes a look at how the NYTimes has finally gotten one right with regards to the elections in Iraq.

Dean doesn’t mince words when it comes to his thoughts on the elections.

Powerline remembers Fern Holland, who was a promoter of women’s empowerment in Iraq.

“It is hard to say that something is legitimate when whole portions of the country can’t vote and doesn’t vote,” Sen. John Kerry, D-Mass., said on NBC’s “Meet The Press.”

Can you imagine amongst the positive news we’ve had about voter turnout and low violence in Iraq today a president of the US, who is the commander in chief over 150,000 troops trying to help secure the polling places, saying something like that?

Even more: HEH! (Wink: The Corner)

3 Responses to "They have voted in Iraq"