Under pressure from President Bush and other top federal officials, the mayor Monday suspended the reopening of large portions of the city over the next few days because of the threat of a new round of flooding from a tropical storm.

"I am concerned about this hurricane getting in the gulf. … If we are off, I’d rather err on the side of conservatism to make sure we have everyone out," Mayor Ray Nagin said.

The announcement came after repeated warnings from top federal officials _ and the president himself _ that the city was unsafe.

The mayor said his original plan was never intended to put people at risk.

"Now we have conditions that have changed. We have another hurricane that is approaching us," he said. He warned that the city’s pumping system was not running at full capacity and that its levee system is still in a "very weak position.

I’m so thankful Nagin did the right thing here. I still can’t believe he’d call for a reopening so soon when there were still serious health issues, flooding, and of course dead bodies to be collected. 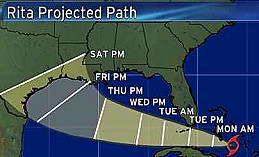 I think Nagin was kind of “making a stand” when he went against the request of the feds, who had asked him to reconsider his decision to reopen New Orleans, especially considering that the weather gurus are predicting Tropical Storm Rita to strengthen into a hurricane and have projected a path for the tip of southern Texas, northeastern Mexico, and southern La. which (obviously) includes New Orleans.

Speaking of, please continue to keep the affected areas in your prayers, as well as those in Texas (like Jason) and Mexico who may feel the force of Rita as early as this weekend.