Hard to believe Christmas is over already. And 2005, for that matter. Where did the time go?

On a semi-light note, I’d just like to say that I believe the Panthers got robbed yesterday. Did ya’ll see that game, especially the kick that was blocked (yes, it was blocked!)? I think it’s safe to say that most Panthers fans are fuming about that call, and also the earlier call that got Steve Smith ejected from the game. Maybe the refs were eager to get home for their Christmas feasts or something, but some of the officiating yesterday was horrible. Had that bad call actually gone our way, the Panthers would be sitting comfortably atop the NFC South without having to worry about whether or not they’ll be in the playoffs. Now we MUST beat Atlanta in Atlanta next weekend to make it.

On a more serious note, Christmas wasn’t the same this year for me. We had a pet tragedy in the family on Christmas Eve: my sister’s chow, named Ginger, passed away early morning Christmas Eve. Ginger had been sick for a while, and the last week had taken a turn for the worse. My sister and BIL were going to try to spend one last Christmas with her and had pretty much decided that after Christmas, they were going to take her to the vet so she would no longer suffer. Ginger was a strong gal, but she couldn’t make it. The last couple of days of her life, she had stopped eating. My BIL told me yesterday that had what happened in the early morning hours of Christmas Eve, that they had planned on taking her to the emergency vet Saturday to take care of things. As it stands, Ginger took care of things for them.

Ginger was a beautiful chow that my sister and BIL had had since she was a puppy. When the family first found out they’d gotten a chow, we were all concerned because from what little we had heard about chows, they could be very mean. Ginger was never mean – in fact, she was the friendliest chow you could possibly meet. So friendly, in fact, that in the last few years of her life, she became domesticated – yes, she became an indoor chow. My sister and BIL loved Ginger like she was their child, and that’s the way they treated her. The don’t have kids of their own, so Ginger was their child and they took very good care of her.

Interestingly enough, the only picture I have of Ginger where my sister or BIL are not in it (they’d both kill me if I posted their pix online!) is one I took at their house Christmas Day 2004: 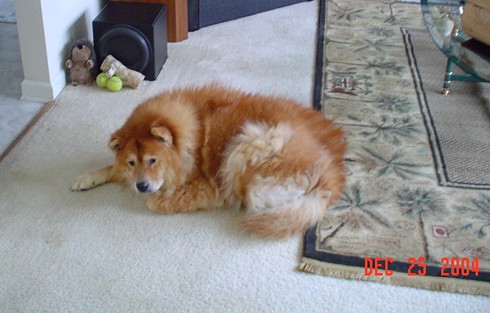 She was just the sweetest dog.

The last time I saw Ginger was back in October when my sisters, mom, and I got together for a girls day out. Ginger didn’t look well then, but she was up and around and eating and somewhat energetic. I remember telling my mom at that time that I didn’t know if Ginger was going to make it til the end of the year, with the way she looked. My sister and BIL agonized over having to make the decision as to whether or not to take her to the vet. Anyone who has had to think about making that decison will understand that. We had to do that with my beloved Sassy cat many years ago. I remember my mom making two different appointments to have her put to sleep that year, but we couldn’t go through with it. Sassy let us know it was time when she shut down and withdrew from us and stopped eating. We took her in on a Saturday just a couple of days after she completely withdrew and at that time the vet sent her on her journey to kitty heaven.

Ginger was a daddy’s girl – she was close to both my sister and BIL, but she and my BIL shared a special bond. My sister’s cat, the dearly departed (many years ago) Buddy, was a mama’s girl and Ginger was daddy’s girl.

Ginger’s daddy had to bury her on Christmas Eve. Both he and my sister paid their final respects to Ginger Saturday morning around 9 a.m. Oddly enough, this Christmas Eve was the 6th anniversary of my sweet lil’ Muffin coming into our lives.

The family had planned on all getting together at my other sister’s house around 6 on Christmas Eve and still did, but minus my older sister and BIL, who for obvious reasons didn’t feel up to celebrating. They knew that Ginger was in a better place, and no longer suffering, and I think they felt some measure of relief at that. But that feeling of relief lends itself to feeling guilt for feeling relief, and they needed some ‘down time’ at home to reflect, which was completely understandable.

It goes without saying that it’s hard to know that family members are suffering while there’s nothing you personally can do to alleviate the suffering. Celebrating Christmas last night was not the same without having my eldest sister and BIL there. In fact, we really didn’t ‘celebrate’ per se. We said our thanks to God for the blessing of another year, and also prayed for the part of our family who couldn’t be with us last night – we prayed for them to be at peace with what happened, and for them not to suffer over it.

In a weird way, we felt that Ginger had given them and herself a Christmas present of sorts – for them, relief that she was no longer suffering, and for her, the same relief along with the entry into doggie paradise.

Ginger was almost 14, and led a full life filled with love from her family, especially from my sister and BIL.

8 Responses to "Odds and ends"