This ought to get your blood boiling this morning:

A flap over reciting the Pledge of Allegiance in court has resulted in a Gwinnett County judge’s recusing himself from a case.

As he does each time he begins court proceedings, Lewis turns to the flag behind his bench and recites the pledge. He invites those in the courtroom to stand and join in but does not require it.

He began the practice with his first court session after the Sept. 11, 2001, terrorist attacks, and has done it ever since.

But in a letter dated March 17, Atlanta-based attorney Donald A. Weissman, who is representing the defendant, told Lewis he objected to beginning court with “a public declaration of national loyalty.”

He asked Lewis to stop the practice or recuse himself from the case.

In an order dated March 30, Lewis said reciting the pledge is not “mandatory, requested or required” for people in the courtroom, and ruled that Weissman’s request had no basis.

The next day, during a hearing in open court with television cameras rolling, Weissman handed Lewis a copy of an official complaint he filed with the state Judicial Qualifications Commission.

Once the complaint was filed in court, Lewis was “ethically required” to remove himself from the case, Gwinnett Chief Magistrate Warren Davis said.

If the qualifications commission finds merit in the complaint, a final ruling could take months, Weissman said.

Judicial Qualifications Commission Executive Director Cheryl Custer could not be reached for comment.

Weissman said he’s concerned that failure to recite the pledge could affect fairness in the courtroom.

“The more I thought about it, the more concerned I became about whether people in the courtroom might perceive some degree of partiality based upon whether your loyalty is to the United States or not,” he said.

Weissman contended in his March 17 letter that Lewis apparently considered his court “to be an American court, rather than a court for all persons situated in America.”

Newsflash to the unwise Weissman: it IS an American court!

Michelle Malkin notes a post from Free Republic that has declared today “Take an American Flag to Work Day” – I’ve got one here at my desk that I keep, but here’s a photo of the flag that I’d like to display on this blog in honor of this day, and every other day – because as far as I’m concerned, everyday is flag day: 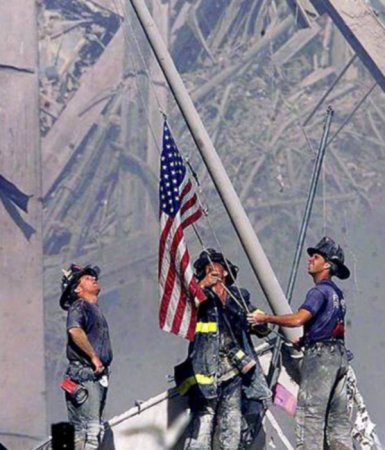 I Pledge Allegiance to the flag of the United States of America
and to the Republic for which it stands,
one Nation under God,
indivisible, with liberty and justice for all.

20 Responses to "Judge’s recital of pledge leads to recusal"