In an effort to honor our fallen heroes, as well as celebrate Iraqi Liberation Day (which is April 9th), I am posting a guest post from the father of soldier who gave his life fighting in Operation Iraqi Freedom. Some other bloggers are posting guest posts as well – those who are participating will be noted at the end of this post so please check out the messages posted at those sites from other family members of fallen heroes as well. I’m honored to post to you a message from Gold Star father Robert Derga from Uniontown, Ohio: 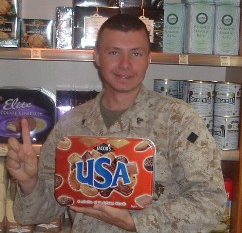 I’m writing to tell you about my son Dustin Derga. Dustin was known as a prankster and the “nicest guy around”. But more than that he was a Marine who believed it was his duty to go to Iraq, defend America and help establish freedom for the Iraqi citizens. Read more about Dustin’s story here.

He always had a great smile on his face. All the guys in Dustin’s unit said he was always making them laugh. He wasn’t the most â€˜squared away’ Marine, but he had a passion for the Corps and was proud to be a Marine.

Sadly, our son, Cpl Dustin Derga died May 8th 2005. Since his death, I feel it has been my duty to honor Dustin by sharing with others his story and his positive outlook about what was happening in Iraq. I am teaming with Families United to reach those media outlets that have yet to focus on anything but the bombings and deaths in Iraq. Read about Families United here.

I need your help to get the out the good word.

I hope you will join me in encouraging the national media to recognize that Iraqi Liberation Day is on April 9th. Don’t Ignore this Milestone!

God bless you and your son, Mr. Derga, and the rest of your family as well. As I have written here in the past, it’s our men and women in uniform and their families here who sacrifice the most for this great nation, so that we can enjoy the freedoms that so many take for granted. Thank you for letting me post this and once again, God bless.

20 Responses to "Honoring our fallen heroes : A message from a Gold Star Father"