I’m a bit behind on blogging about the stir the media whipped up this week over former House Speaker Newt Gingrich’s comments regarding the war in Iraq. Some media outlets breathlessly reported that Gingrich, in a speech to students and faculty at the University of South Dakota back on Monday, called for a pull out from Iraq.

Scoop for Sioux Falls Paper: Newt Gingrich Wants US Out of Iraq

If you click on the link, you’ll notice that that headline has now been changed to read:

That Sioux Falls Paper the Editor and Publisher was referring to was the Argus-Leader. The original Argus-Leader headline read:

Gingrich at USD: Pull out of Iraq (video)

Here’s a screencap of that headline (courtesy of Steve Sibson at Sibby Online, a South Dakota blogger who has documented liberal bias at the Argus-Leader before): 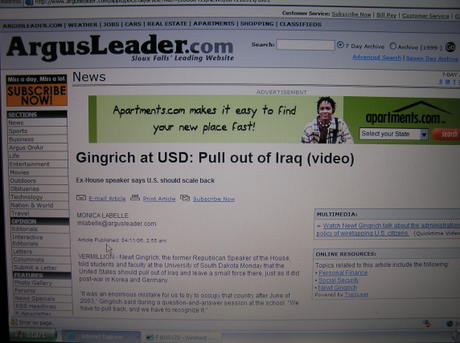 Gingrich at USD: Scale back to small force in Iraq (video)

Here is the Argus-Leader’s explanation of its faux pas, via its executive editor Randell Beck:

The story on our Web site carried only the main headline over the story. And it took about two and a half seconds Tuesday morning for the storm clouds to gather.

The Drudge Report, a Web site devoted to political news and gossip, linked to our story (and headline). The phones started ringing.

Gingrich’s people called to say the story was right but the headline was wrong. True believers, fueled by chatter on the Internet, accused us of twisting his words. CNN called wanting our video of the former speaker’s comments. Even local folks who heard Gingrich’s speech Monday night called to say they hadn’t heard him say that.

Fact is, Gingrich’s comments about reducing our presence in Iraq occurred earlier in the day, during a question and answer session with students that LaBelle attended. And he didn’t say the same thing in his speech that night. Appearing Wednesday on “Hannity and Colmes” an evening talk show on the Fox Network, Gingrich didn’t dispute what we’d quoted him as saying, though he did think the headline was incorrect.

I agreed that the headline on our Web site didn’t fully capture the sweep of Gingrich’s comments, and we changed it Tuesday morning. But I decided that, taken together, the two headlines in the print edition of the Argus Leader captured the scope of his comments â€“ and needed no correction.

Not everyone will agree with that call. Does “pull out” mean leave completely? Or, as in the case of our sharply reduced military presence in Germany and Korea after those wars, can it also imply leaving a small occupational force?

Headline writing is an art form, and accurately boiling down an 850-word story into six or eight words is difficult. We miss the mark occasionally, as any newspaper does. Even more relevant: In today’s politically charged environment, people spin the nuances of headlines through the prism of their own opinions.

Note that “people” [read: readers] “spin” headline “nuances through the prism of their own opinions” but headline writers merely “miss the mark.”

For the record, here’s the part of Newt’s speech where he discussed Iraq. The transcript can be read here. The entire speech an be viewed by copying and pasting the following link into your broswer: mms://video.usd.edu/newtgingrich

Here’s Newt on Fox News’ Hannity and Colmes, clarifying his remarks (which he shouldn’t have had to do):

COLMES: […] Now listen, you’re making some news today, saying some things about the Bush administration. Some say they contradict what you’ve said in the past. Here’s what you said on “Hannity & Colmes” in June of 2005.

GINGRICH: The key question for critics is simple. What would you do? You have terrorists there who want to kill us. You have representatives of the old dictatorship who want to kill us. Do you really think America would be better off if we cut and run, if we showed to the world that we were afraid and we had no courage?

COLMES: And Mr. Speaker, here’s what you said yesterday in your speech. You said: “It was an enormous mistake for us to try to occupy that country after June of 2003.” You said this to, according to the Argue Leader of Sioux Falls, South Dakota: “We have to pull back, and we have to recognize it.”

Have you had a change in thinking?

I said, first of all, that in June of 203, Ambassador Bremer made a huge mistake by failing to try to develop an Iraqi interim government at that time and continue the process of liberating the country. And I have said that as early as December of 2003, long before the presidential election. I think that this was a mistake.

We were much better off in Afghanistan, where we developed a government with President Karzai, and we had Afghans from day one helping run their own country.

I also said something which I think secretary Rumsfeld and General Abizaid and General Casey have all said, and that is that as rapidly as we can train Iraqi police and soldiers, that we should pull out of the cities and pull back to bases that allow the Iraqis to do the policing every day and allow us to be reinforcers rather than enforcers. But I think that’s actually the administration plan and is not a contradiction with their position.

COLMES: You said on “Hannity & Colmes,” if we pull back, you referred to it as cut and running. We can’t do that. It would be showing the world we are afraid and have no courage.

Yesterday you said we have to pull back; we have to recognize it. Very much like what John Kerry said last week. He came up with certain dates but he actually came up with a plan about pulling back, just like you suggested.

GINGRICH: Wait. But — no, if you read what I actually said, Alan, I said we may have well have troops there for a very, very long time because of the direct threat from Iran and the danger of Iranians developing nuclear weapons and the kind of things that Ahmadinejad, the Iranian leader, has been saying about defeating the U.S. and destroying Israel.

So I actually am the opposite of John Kerry. All I want to do is exactly what General Abizaid is doing, which is maximize the rate of training of Iraqi forces and minimize the direct exposure of Americans in trying to police the country.

I am not for any precipitous withdrawal from Iraq, and I think Senator Kerry was advocating a policy of absolute defeat when he suggested he would set a date, which I think he said could be as early as May.

SEAN HANNITY, CO-HOST: Good to see you in New Hampshire, Mr. Speaker. I’m going to get to that in just a second. Don’t think you’re getting off the hook.

I actually spent the time, and I actually listened to the speech. It’s almost reckless to the extent that which has been reported and taken out of context, your remarks. Because they were a much broader way delivered. And you’re talking from a very philosophical, historical standpoint.

And then you went on to support the current plan and the way it’s going and everything else, which is a stark difference. It was only reported negatively in one place. There are a bunch of other media there. They did not report it the same way there, because they actually listened to the whole speech.

GINGRICH: Well, I think actually the one headline writer, unfortunately, for that one newspaper, just was wrong in how he interpreted the report. That, however, it’s interesting to note, was the thing that got picked up by other newspapers that apparently didn’t check the speech itself even though in the age of the Internet you can.

GINGRICH: They didn’t check the other reporting. And as you point out, Sean, there were two newspapers and a television station that all got it exactly right. And it’s a little disappointing to have some national publications not go beyond that one headline to look at what I actually said.

HANNITY: I want to expand a little more on Kerry’s specific statement that he made. “Iraqi politicians should be told that they have until May the 15th to put together an effective unity government or we will immediately withdraw or military.”

How dangerous is that?

If his plan would guarantee the defeat of the United States in the Middle East and would leave us dramatically weaker in dealing with the Iranians. It’s a very sad thing to see.

More: Expose the Left has a video of Newt on today’s Chris Wallace show where Newt talks about his comments on Iraq, as well as what the Republicans need to do to win the elections this fall. It’s a nine and a half minute video, but well worth watching.

15 Responses to "The misreporting of Newt’s comments on Iraq"