(Monday Update: Michelle Malkin has a link roundup of other Memorial Day tributes around the blogosphere. Check the trackbacks here for other tributes.)

I originally posted the following message back on August 11, 2005 – and wanted to re-post it today, in honor of Memorial Day. Though my message included a tribute to those still serving, it also applies to the families of those who have lost loved ones in wars past and present – those who made the ultimate sacrifice defending our country, our flag, and what our flag symbolizes. 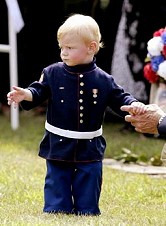 The adorable young gentleman you see to the right is 1 year-old Alex Montgomery.  Alex’s father, US Marine Lance Corporal Brian Montgomery, was killed August 1st while serving honorably in Iraq.

It is photos like these that break my heart.  I know that this young man will grow up without his father.  He’ll get to know him through stories told by his mother and other family members and friends, who no doubt will shower little Alex with discussions about their time spent with his father.   Alex: your father was a hero.

To the families of our men and women serving overseas, I’d like to offer the sincerest thank you I possibly can, from the bottom of my heart.  Obviously, the lions share of the burden of this war is shouldered by our soldiers, but the families aren’t far behind in that.  From the moment their loved one(s) enlist, to the endless worrying day and night when they are sent overseas to fight for our country, the worry is always there.   They are the ones who pray they don’t get that midnight phone call, or afternoon knock at the door.

I know my thank you isn’t much, and it certainly can’t bring Alex’s father back,  but it’s one of many thank yous out there that millions in this country express in many ways in appreciation and respect for the service of your loved one(s).  I’m sitting here today typing this because of honorable soldiers past and present who have fought for, and in some cases made the  ultimate sacrifices, for me and my fellow citizens to have this freedom.  Former Senator Zell Miller (D-GA) said it best here:

Never in the history of the world has any soldier sacrificed more for the freedom and liberty of total strangers than the American soldier. And, our soldiers don’t just give freedom abroad, they preserve it for us here at home.

It is the soldier, not the agitator, who has given us the freedom to protest.

It is the soldier who salutes the flag, serves beneath the flag, whose coffin is draped by the flag, who gives that protester the freedom to abuse and burn that flag.

Your sons and daughters, fathers and mothers, sisters and brothers are not occupiers – they are liberators.  The ultimate sacrifices made are not in vain.  Your loved ones will rightly be viewed as heroes forever.  Again, thank you and God bless.

I urge anyone wanting to express their show of support (via written means or care packages, etc) to please click here.   Most important of all:  pray.  Our troops need our support now – and always.  Because freedom isn’t free.

14 Responses to "Remember the fallen"