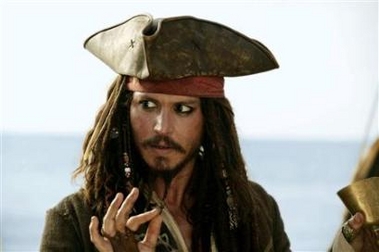 “Pirates of the Caribbean: Dead Man’s Chest” set a three day record of taking in $132 mil in its opening weekend at the box office. I’ll be checking it out next weekend. I won’t be wearing my pirate wench costume, though

Johnny Depp makes an awesome pirate – another favorite Hollywood pirate for me is Errol Flynn as Captain Blood. Also, Kevin Kline as the Pirate King in the film version of the Broadway play “The Pirates of Penzance” is a favorite.

If anyone got a chance to catch Pirates of the Caribbean this past weekend, let us know in the comments as to whether or not you enjoyed it. So far, the reviews I’ve seen of it have been really good.

13 Responses to "Oh, how I love pirates"