Here’s the photo and caption, in case that link changes soon: 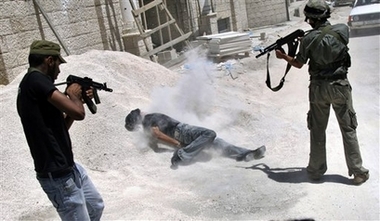 Palestinian gunmen, who identified themselves as members of the Islamic Jihad group, shoot a man in a public square in the West Bank town of Jenin Sunday Aug. 13, 2006. The man, who was executed in front of hundreds of people, was accused by the gunmen of giving information to Israeli authorities, helping them to kill two militants last week in a targeted attack, said witnesses and Islamic Jihad members. The victim was identified as Bassem Malah, 22, who worked in the Israeli Arab town of Umm al Fahm. (AP Photo/Mohammed Ballas)

Mon PM Update: Dan Riehl has more photos of this incident. Note the crowd’s reaction to the after-death beatings this man rec’d.

11 Responses to "Where’s the outrage?"