(UPDATE: SIGH. When I first blogged about this, I said Ernesto was a hurricane again. Judging by the story I posted, and other stories, he is not yet a hurricane again but could be soon. My bad. It’s been one of those days!)

He dumped a lot of rain but not much else on Florida as a Tropical Storm, but now he’s strengthening and headed for the Carolinas:

At 11 a.m. ET, Ernesto had sustained winds of 60 mph — still below hurricane status of 74 mph or greater, but enough of a concern that the National Hurricane Center issued hurricane watches for the coastline from the South Santee River in South Carolina to Cape Lookout, N.C.

Ernesto’s outer bands reached the South Carolina coast early Thursday as the storm threatened to sweep ashore on top of thunderstorms that have been drenching the Carolinas for over a day. 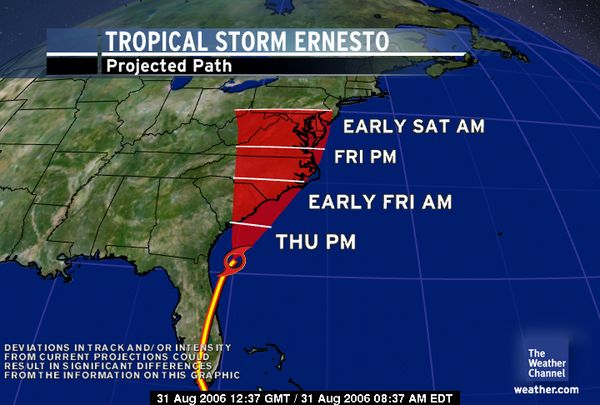 Charlotte is just on the edge of it on the left hand side, down there on the NC/SC line. Looks like we’d get mostly rain here if the path is on target, and places like the coast (obviously) and Raleigh, as well as Charleston, SC would be hard hit.