“The danger is if they decide to pull up the drawbridge and disengage. We need them involved,” Blair said, spelling out his political vision in a pamphlet published by The Foreign Policy Center think-tank.

“The strain of, frankly, anti-American feeling in parts of European politics is madness when set against the long-term interests of the world we believe in,” he said.

Blair, accused by critics of being Bush’s poodle who slavishly follows Washington’s line, sought to stifle a revolt in his ruling Labour Party last week by promising to quit within a year after almost 10 years in office.

His popularity has tumbled in opinion polls after government scandals over sleaze and mismanagement were compounded by controversy over the wars in Iraq and Lebanon.

As he did during the Iraq War, he sided squarely with Washington over the conflict between Israel and Hizbollah guerrillas, angering Arab nations and European allies by refusing to call for an immediate ceasefire.

Responding to those who have criticized the White House, Blair said in his pamphlet: “The danger with America today is not that they are too much involved.”

“We want them engaged. The reality is that none of the problems that press in on us can be resolved or even contemplated without them,” he added. 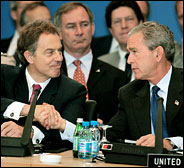 The sad thing is that once Blair’s gone, whoever is elected to replace him will likely campaign on a platform of ‘soft’ anti-Americanism. That is, not outright saying that America is the root of all evil, but implying that our policies ‘endanger the world’ and other such assorted nonsense.

I will be sad to see Blair go. I’m not a fan of his domestic policies, but his stance on the war on terror and standing beside the US in the face of substantial opposition and ridicule in the UK is to be admired. We’ll miss ya, Mr. Prime Minister.

By the way, click on the picture for the story behind that handshake. Classic example of why Mr. Blair stands tall against a bunch of frightened sheep posing as ‘leaders’ in Europe.