As the America Supports You site shows, there are many, many ways out there we can show support our troops. Here’s another, via AP:

NEW YORK – A group of Marines and ex-Marines who fought in Iraq — including two wounded there — is featured in a beefcake calendar being sold to help wounded veterans.

“It’s a stopgap effort to help people where government programs leave off,” said Rudy Reyes, who served two tours in Iraq and one in Afghanistan and is on the calendar’s cover. “This is a way for citizens to help citizens.”

The “America’s Heroes” calendar is being sold by Freedom is Not Free, a San Diego-based nonprofit group that helps injured service members and their families with such expenses as travel, mortgage and utility bills and special beds for burn victims.

Reyes and the other men who appear in the glossy 2007 lineup served in Iraq in Marine reconnaissance units. Sgt. James Wright, 31, who lost his hands and part of his leg, appears on the back cover in full uniform, saluting with what’s left of his right arm.

Several members of the group, promoting the calendar on a cross-country tour, said Thursday they have medical conditions, ranging from combat stress-related symptoms to injuries to their feet, knees, hips and backs from carrying combat loads of more than 200 pounds.

When service members come back, “many don’t have the financial or emotional support to get back to daily life,” said former Sgt. Michael Saucier, 24, of Prior Lake, Minn., who served two Iraq tours and is now a carpenter’s apprentice in Lake Tahoe, Nev. 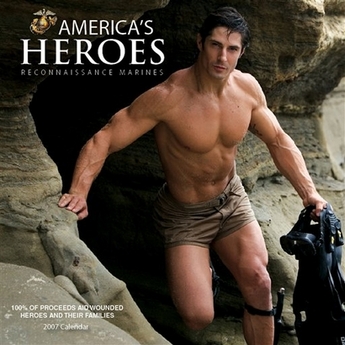 Caption: This undated photo released by Freedom Is Not Free shows former Marine Corps Sgt. Rudy Reyes, of Kansas City, Mo. The photo appears on the cover of the 2007 calendar ‘Americas’s Heroes: Reconnaissance Marines,’ with proceeds to benefit veterans. (AP Photo/Freedom Is Not Free, Tim Mantoani)

More photos of the calendar can be seen here.

I certainly couldn’t see the harm in purchasing a 2007 calendar full of pix of Marines, can you?

Seriously, it’s a very worthy cause, one of many out there for our very deserving troops and their families, both of whom sacrifice so much for our freedom. They may look fantastic, but it’s their noble deeds that stand out even more. Last but certainly not least, please also remember to pray for our men and women in uniform, many of whom will be away from their families and serving overseas during the holidays.

Here’s the Freedom Is Not Free website if you’d like to purchase a calendar. The direct link for purchasing one is here.

9 Responses to "Another way to support our troops"