Rick Monday, former centerfielder for the Chicago Cubs and who many feel made the greatest play ever in baseball, was honored in Charlotte, NC this weekend during Veterans Day festivities:

CHARLOTTE — On this Veterans Day, a former baseball player is receiving a special achievement award for a play he made in centerfield of Dodger Stadium 30 years ago.

Some say Rick Monday made the best grab in baseball history on April 25, 1976, when he pulled an American flag away from two protestors who were going to burn it on the field.

Monday was the centerfielder for the Chicago Cubs playing in Los Angeles against the Dodgers when the protestors ran onto the field in the fourth inning.

“One of them pulled out what proved to be an American flag, spread it on the ground, knelt down beside and began to douse it with lighter-fluid. I mean really, really doused it” Monday said.

On April 25, 1976, Rick Monday pulled an American flag away from two protestors who were going to burn it on the field.

The six-year Marine reserve was angry and took off running.

“I ran at them thinking I might bull them over and stop them from what they were doing, but as I approached I saw I had a chance to get the flag from them before they ignited it” he said.

Despite playing for the Cubs, the Dodgers fans stood and cheered. And then came a special moment.

“I still get goose bumps because almost 40,000 people in the stands, unprompted, not announced to do it, not put up on diamond vision to do it, in one area of the stadium and then another then the entire stadium started singing “God Bless America,’ Monday said.

More than 30 years later, that flag still travels with Monday.

The former ballplayer received the special achievement award from the Carolinas Freedom Foundation and is the grand marshal of Saturday’s Veterans Day parade in uptown Charlotte. Monday, however, wants the real heroes to be remembered.

“This is a moment we all need to sit down and take a look and appreciate all of the sacrifices a lot of people have made to make this the best country in the world” he said.

Here’s a photo of Monday taken this weekend taken with the flag: 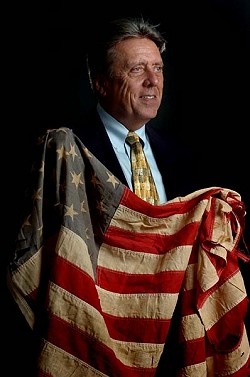 It was an honor to have you in this fine city, Mr. Monday. Thanks for demonstrating once again just how an honest-to-goodness-patriot should conduct himself.

2 Responses to "Rick Monday in Charlotte, NC for Veterans Day"