Time for another round of “caption this.”

I know it’s difficult to look at, but: 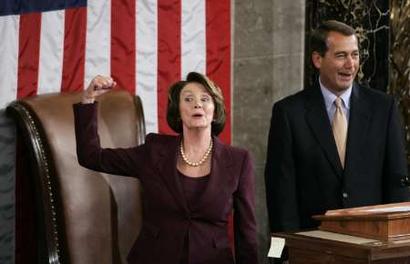 Actual caption: U.S. Speaker of the House Nancy Pelosi (D-Ca) reacts as she is introduced by House Minority Leader John Boehner (R-OH) and takes the House podium for the first time after she was elected the first ever female Speaker of the U.S. House of Representatives on the first day of the 110th Congress in Washington January 4, 2007. REUTERS/Jim Young (UNITED STATES)

BTW, here’s another arm flex pic from a different event.

I don’t really find arm flexing in a show of power by any politician, especially those in leadership positions, as being appropriate and dignified. Same same with respect to claiming you’re the most “powerful woman [or man] in America.” They know they are in positions of power, but bragging about it in my view is not a symbol of the maturity and class we demand from all of them. Imagine Tom DeLay or Denny Hastert doing or saying something like that. The howls of outrage would be heard nonstop day and night.

It’d be different, I guess, if I felt like that arm flex signified a hope from Pelosi for more ‘power to the American citizen’ that she is supposedly representing or something like that, but her actions so far (and not just during this Congress) indicate that that’s not what it represents. It represents ‘power to Pelosi’ and other Democrats, who’ve already repeatedly demonstrated that they will not practice what they preach.

This is what we get thanks to Republicans who pretty much did the same thing, especially in the last six years. We can only hope that a couple of things happen over the next two years: 1) that they’ll have learned from their mistakes and slowly make inroads into regaining majority status after inspiring confidence from the base and regaining the trust of the American people, and 2) the American people pay attention to what absolute jokes people in positions of leadership in Congress (like Pelosi, Rangel, Conyers, and Reid) really are.

Speaking of big jokes, check out this long list of ’em.

Update: Bryan at Hot Air has the details and video of Barney Frank’s accusing GWB of genocide regarding how he and the administration responded to the threat from Hurricane Katrina. (hat tip: Michelle Malkin)

Expect much more of that moonbatty-type talk from the likes of Franks and other far lefties in Congress over at least the next two years as the lunatics are now officially running the asylum.

25 Responses to "Pelosi and the arm flex"