There’s tons of buzz in the blogosphere (a sampling can be seen here) over the news that the airline Jet Blue has decided to sponsor this year’s Daily Kos convention (better known as the “YearlyKos” convention).

Not to be a party pooper, but I can’t get exercised about this. The only thing I can really say about it is that it was a bad business decision by Jet Blue, considering the messes they’ve found themselves in in the last few months with extremely poor service issues. They’ll likely lose a lot of conservative customers who know all too well what the Nutroots are all about. But maybe they’ll pick up many new liberal customers, enough of which at a certain point ought to cause them to reconsider naming the airline “JetRoots.”

I did find this Photoshop pretty cool, though: 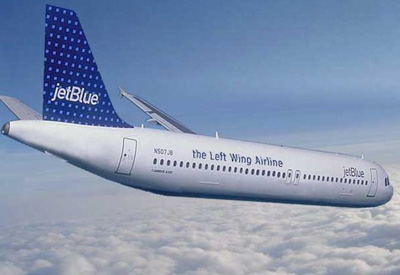 (Via McQ at QandO)