Heard about this story via ST reader Karl:

Police in Goose Creek, SC are investigating a bomb scare. Sources say a four-door sedan was stopped during a routine traffic stopped only to find what was believed to be a bomb inside the vehicle.

The two people in the car were said to be of Middle Eastern decent.

At this time the section of Highway 176 has been shutdown. The FBI and local police are still investigating into the matter.

My first thought after reading this was “why would a (possible) terrorist have a bomb in Goose Creek, SC, of all places?” This AP piece sheds some light on a possibility:

Authorities closed a highway outside Charleston for more than five hours Saturday night after police found explosives in the trunk of a car, broadcast outlets reported.

State and federal law enforcement officials were on the scene after the traffic stop in Goose Creek. Television stations reported that two men riding in the vehicle were detained.

Goose Creek is home to the Naval Weapons Station and the U.S. Naval Consolidated Brig, a military prison where enemy combatants have been held.

South Carolina law enforcement Chief Robert Stewart told The Associated Press that his officers were on the scene, but that the FBI was handling the case. A woman answering the phone at the local FBI office said there was no official comment on the incident.

The FBI says there is no immediate threat. The feds are working with state and local law enforcement in Goose Creek after Berkeley County deputies found explosives in a vehicle Saturday night.

Agents deployed a robot and pulled what looks like a duffle bag from the trunk.

WCIV has a video report on this developing story. Dan Riehl has more links. 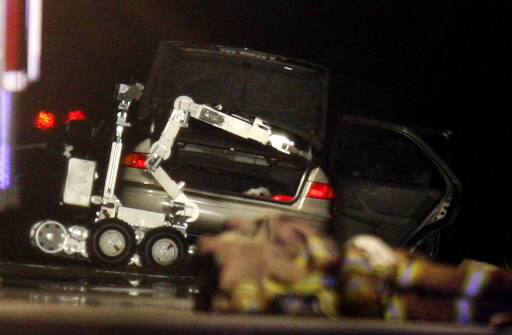 More: Blogger Patrick Archibald got caught up in the detour on his way home (h/t: Blogs of War).

The vehicle with Florida tags was driven by two men of Middle Eastern descent. Some type of explosives were found in the trunk. Those explosives were detonated sometime after three this morning. Two men were arrested. Charges of possession of unlawful explosives are being prepared to be placed against the two men. Officials are not at this time releasing any additional information on the number of charges or types of explosive devices they found.

Two men are being held in the Berkeley County Detention Center after police find explosive making devices in their car. The men 21-year-old Yousef Megahed and 24-year-old Ahmed Mohamed were pulled over Saturday evening during a routine traffic stop near Myers Road and Highway 176. Among the explosive devices found were igniters and fusers. Few details about the suspects are known at this time. They are believed to be students at a Florida college. They are of Middle Eastern descent and are not US citizens. Neither man has been charged, but charges are expected Monday. A press conference will be held at the Berkeley County Sheriff’s office Monday at 11:30 in the morning. Among the potential charges is possession of unlawful explosives. Officials are not at this time releasing any additional information on the number of charges or types of explosive devices they found.