The center reported at 8:35 p.m. EDT that Dean had reached maximum sustained winds of 160 mph.

Tens of thousands of tourists fled the beaches of the Mayan Riviera as the storm roared toward the ancient ruins and modern oil installations of the Yucatan Peninsula.

Mexico’s state oil company, Petroleos de Mexico, said it was evacuating all of its more than 14,000 offshore workers in the southern Gulf of Mexico, which includes the giant Cantarell oil field.

Cancun seemed likely to be spared a direct hit, but visitors abandoned its swank hotels to swarm outbound flights. Officials evacuated more rustic lodgings farther south, where Dean — responsible for at least 12 deaths across the Caribbean — was expected to smash ashore early Tuesday. 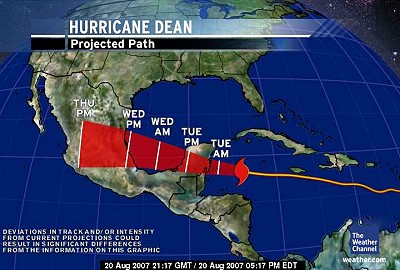 My prayers are with Mexico. This one’s gonna be devastating.