Wow – when I logged on to Drudge’s website just now, I certainly wasn’t anticipating seeing these two pictures: 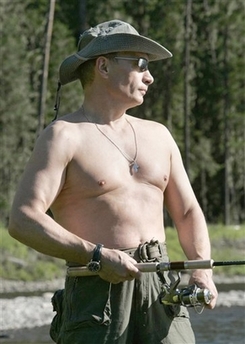 Russian president Vladimir Putin on
a recent trip to the Siberian mountains. 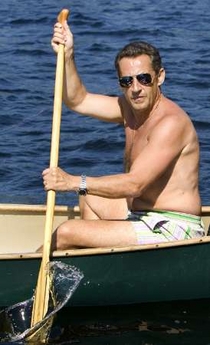 France’s president Nicolas Sarkozy, on his visit to
New Hampshire from a couple of weeks ago.(That photo,
by the way, was airbrushed by the French magazine L’Express.)

I don’t really cotton to seeing shirtless pix of world leaders because that’s not the way I really want to look at them – unless they looked like Hugh Jackman or Matthew McConaughey, which in either case would mean I’d be forced to make an exception to my rule.

That said, the shirtless pix above in no way compare with one of the most unintentionally sexy moments for a world leader ever caught on camera – not shirtless, but in a flight suit instead: 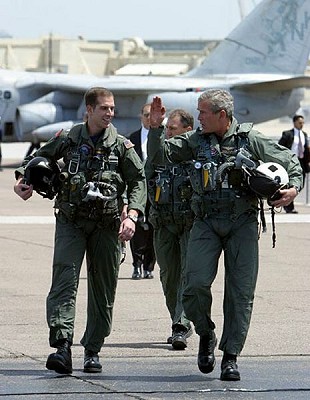 Now, normally I would never put the words “President Bush” and “sexy” in the same sentence, but in this case …

Update: In semi-sorta related news, Jules Crittenden blogged today about a new campaign in Australia designed to “stop young studs from speeding” – by suggesting that guys who speed do so because they’re making up for, uh, deficiencies elsewhere